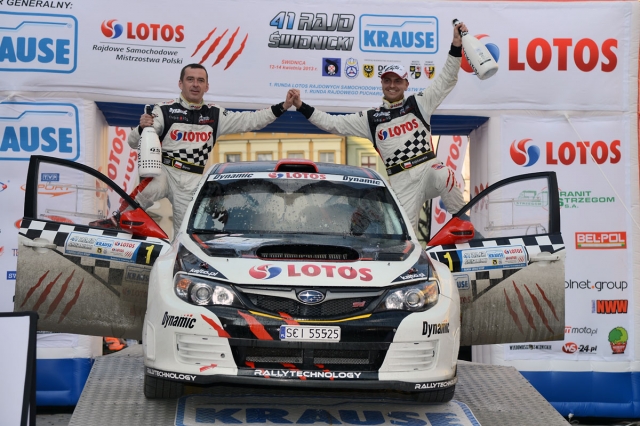 Kajetan Kajetanowicz and Jarek Baran won the first round of Polish Rally Championships, the second season in a row remaining unbeaten in tarmac surface. We haven’t experienced such emotions, like the ones in this round, for months. Kajetan Kajetanowicz and Jarek Baran from the very first kilometres of special stages showed their determination. They were fighting for every kilometre and were the fastest in half of special stages. But only winning the last part gave the victory to The Polish Champions of LOTOS Rally Team. Kajetan and Jarek thanks to gaining maximum points both in general classification as well as the first day of the rally, became this season’s first leaders of the Polish Championships.

Kajetan Kajetanowicz I love such experience when you have to drive under pressure and a lot is going on. I want to thank Wojtek and Kamil for rivalry. Probably, if we hadn’t skidded and ended up in a drift in the morning, the situation would have been more comfortable. And because of this we spent the whole day making up for the lost time (0.2 seconds in difference between us before the last stage) – but this is what this sport is about. It makes rallies more exciting. Fast competitors I compete with, make me drive even faster. Although it’s my fourth victory in Swidnica, it’s my first one with the new LOTOS Rally Team. It’s also their and all my fans’ success. Their involvement positively surprises me.

Jarek Baran I have always wanted to win this rally the seventh time to able to have the same number of victories like the great Polish co-driver Ryszard Zyszkowski. This record was beaten after 21 years and it would be great if it remains for two decades :). Before the rally I claimed that the second day would be easier, but once again rallies turned out to be unpredictable. I want to thank Kajetan and Wojtek with Kamil for two exciting days.