Kajetan Kajetanowicz is a Polish rally driver. He was born on March 5, 1979 in Cieszyn and currently lives in nearby Ustroń, a city situated in the Silesian Voivodeship in southern Poland. Member of the ORLEN Rally Team for the past decade, European Rally Champion in 2015, 2016 and 2017, four-time Polish Rally Champion in 2010-2013. Double World Rally Championship in WRC2 (2019) and WRC3 (2021). Third-placed WRC3 driver in 2020.
According to internet polls among the fans, Kajetan Kajetanowicz is a top-five sportsman in Poland. Nominated in contest for The Best Sportsman of Poland in 2017, fourth place in 2020. Finalist at XVI Sports And Business Gala in 2020, in Sports Image category – selected by Awards Of Sports Business committee.
Ambassador of many social campaigns: his own "Safe at the wheel" and ORLEN Champions on the road, Global Compact Poland, National Children’s Reading. Awarded with the Silver Cross of Merit by the President of Republic of Poland in recognition of his role in popularisation and development of Polish sport, Fair Play Award received from the Polish Olympic Committee for sportsmanlike behaviour during Barum Rally Zlín in 2015.
Career-best season of Kajetanowicz. This is how the Polish driver clinched his runner-up spot in the World Rally Championship
Kajetan Kajetanowicz and Maciej Szczepaniak have enjoyed a spectacular season, impressing not only with excellent pace but also with great success rate. The Polish crew wrapped up six podium places in seven events, scoring runner-up spots in Estonia and Spain, third position in Rally Monza and victories in Croatia, Portugal and Greece. After second place in 2019 (WRC-2 category) and third last year (WRC-3 category), the LOTOS Rally Team duo added another top-three position to their tally. Kajetanowicz finished the championship in second position and Szczepaniak won the title (as their main rival Yohan Rossel changed his co-driver).

Intense preparation ahead of the 2021 season had lasted for a few months. The Polish crew decided to continue with a Skoda Fabia Rally2 Evo run by the Spanish team RaceSeven. Kajetan Kajetanowicz and Maciej Szczepaniak have started their campaign with Croatia Rally. This tarmac event was included in the World Rally Championship calendar for the first time and only a few competitors had some past experience with the roads. It was not only speed that mattered – the crews had to adapt quickly and learn with every kilometre as well. Kajetanowicz and Szczepaniak managed to achieve it flawlessly, winning four special stages and recording seventeen top-three finishes. They outperformed many factory crews (WRC-2) and set the pace among WRC-3 competitors, starting their championship quest with a great victory.

Second outing, second unknown rally and second win for Kajetan Kajetanowicz – the LOTOS Rally Team driver, paired with Maciej Szczepaniak, won Rally de Portugal in excellent style. The Polish duo recorded top-three times on the majority of the special stages, winning seven tests during one of the toughest and longest rounds of the World Rally Championship. After their fourth WRC victory, they moved up into second position in the standings.

The next round of the championship took place in Sardegna. Right from the beginning of the competition everything went as planned – Kajetanowicz and Szczepaniak set top-three times on seven stages, winning two of them. However, less than two kilometres before the finish line of the final test of the day, their fight for another stage win unfortunately ended off the road. Their Skoda was not damaged but there were no spectators around and the crew did not manage to bring the car back on the road.

They returned to competition on Saturday, notching up six top-three results on seven special stages – including one win – and recording an excellent seventh-fastest time in the overall classification. On Sunday Kajetanowicz and Szczepaniak gained one more position on the opening stage, with a fantastic performance on the following test. They won SS18 Aglientu-Santa Teresa 1 (7.79 kms) in the WRC-3 category, defeated all factory crews competing in WRC-2 and set an excellent sixth-fastest time in the overall classification. On the final test – Power Stage, with bonus points – they recorded second-fastest time, scoring more precious points and finishing the rally in eighth position.

In July Kajetanowicz and Szczepaniak returned to Estonia. This event enjoys a well-deserved reputation of the festival of speed. The average speed on most of the stages exceeds 100 kph, reaching 120 kph on the fastest tests. Kajetan and Maciej maintained good and consistent pace, finishing 15 stages in top three. They finished this round in second position, scoring 18 points.

Two months later Kajetanowicz and Szczepaniak contested the iconic Acropolis Rally, which returned to the World Rally Championship after eight years. In the meantime this event formed a part of the European Rally Championship and Kajetan won it twice.

In 2021 Kajto recorded six stage wins and eleven top-three times, claiming second position in the WRC-3 standings. The LOTOS Rally Team added another five points to their tally, winning the Power Stage Tarzan. On Sunday evening the stewards excluded the WRC-3 winners, Rossel and Coria. Parts of suspension in their car did not comply with homologation, just like in Rally Sardegna. Ultimately, Kajetan Kajetanowicz and Maciej Szczepaniak were awarded with maximum amount of points for rally win.

The LOTOS Rally Team crew scored their fifth podium position in six outings thanks to another runner-up spot, this time in Spain. With additional points for the Power Stage win, they took the lead in the championship standings. The Polish duo, supported by huge crowd of rally fans, showed brilliant and solid pace, finishing thirteen special stages in top three.

The fantastic 2021 season came to an end at Rally Monza – only Kajetan Kajetanowicz and Yohan Rossel remained in the title fight. Over the course of the rally they exchanged blows, setting excellent times on very demanding and treacherous special stages. Kajetanowicz led ahead of the final test but Rossel managed to overtake him on the Power Stage – so Kajetanowicz finished the year in second position and his co-driver Maciej Szczepaniak won the world championship title among the co-drivers.

Time for the icing on the cake and a special thank-you for the fans came in December, during the 59th edition of the iconic Rally Barbórka in Poland. Kajetanowicz set the pace on all six stages and won this blue-riband event for eighth time, adding his ninth victory in "Aces’ Competition" – a spectacular city stage on Karowa Street in downtown Warsaw. 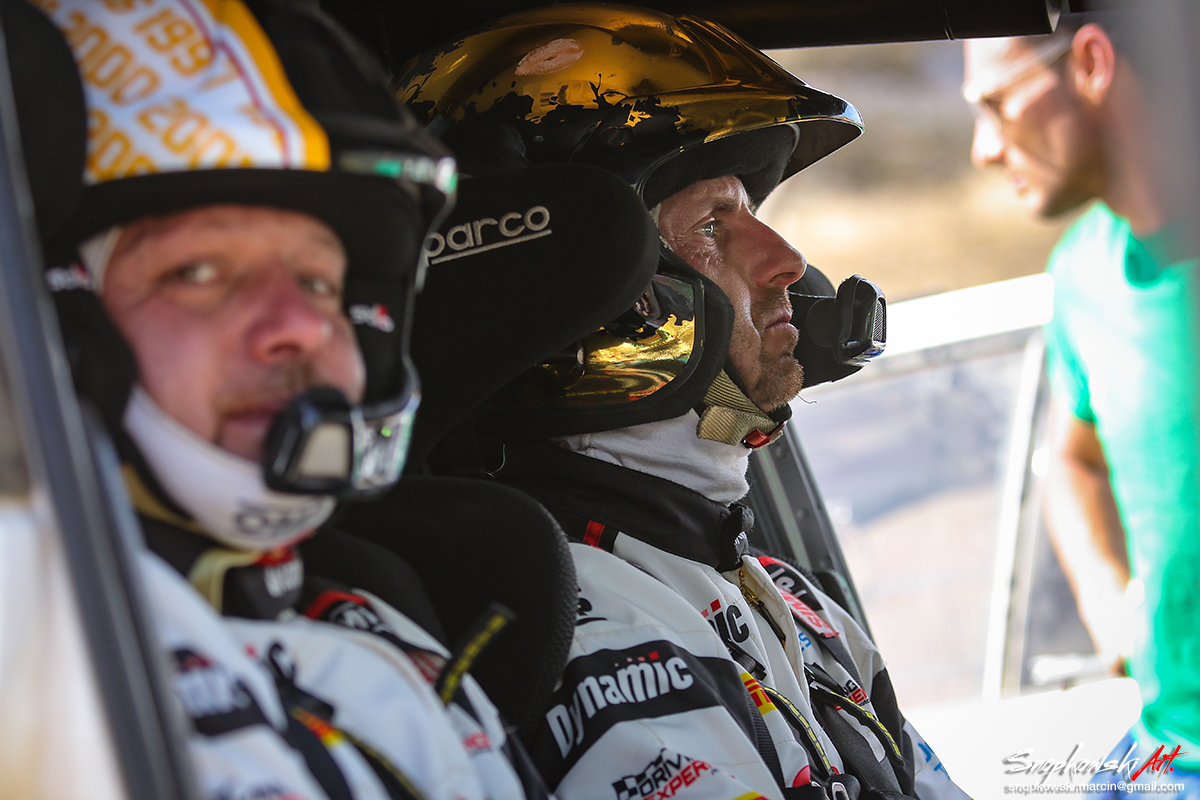 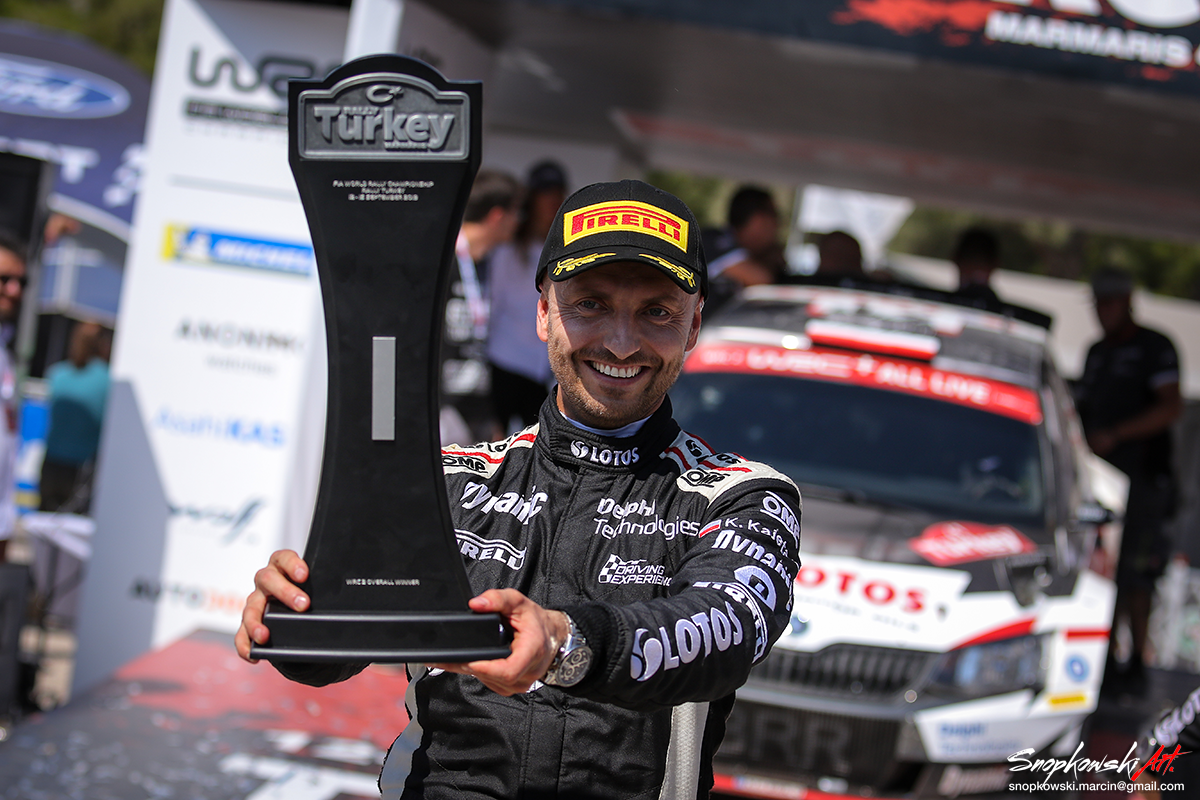 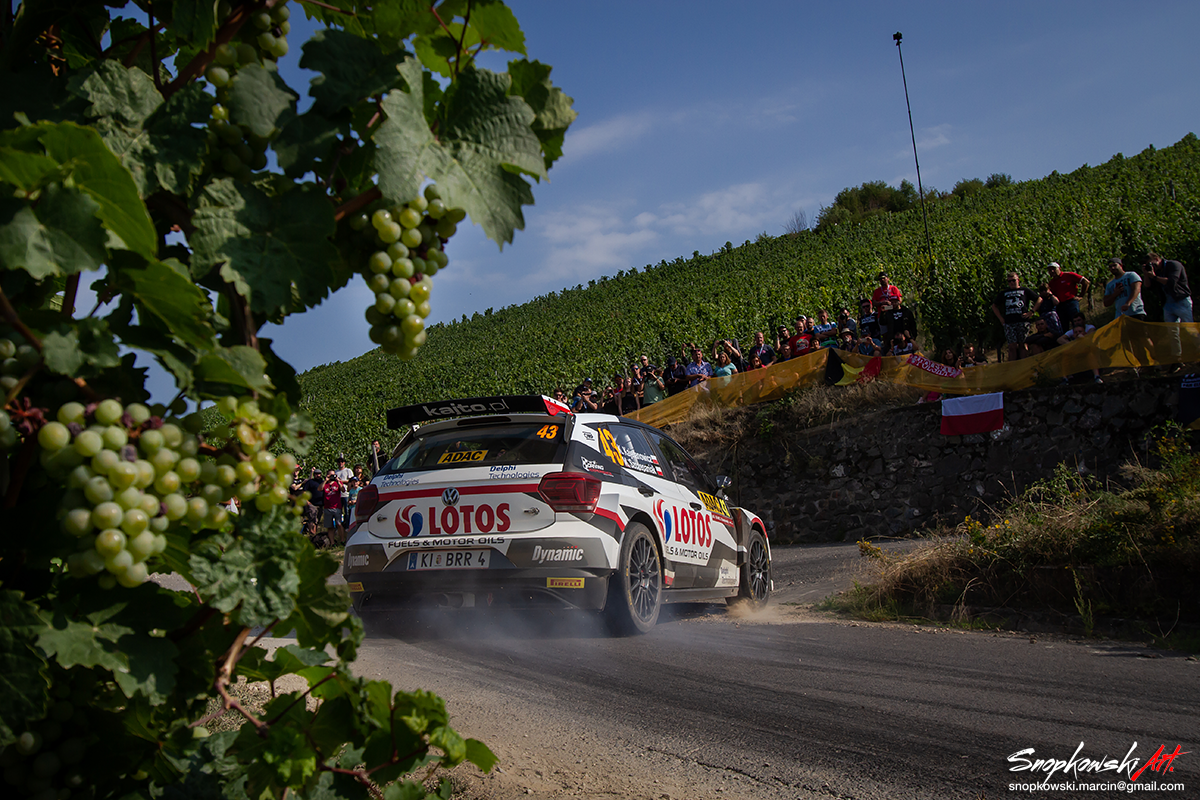 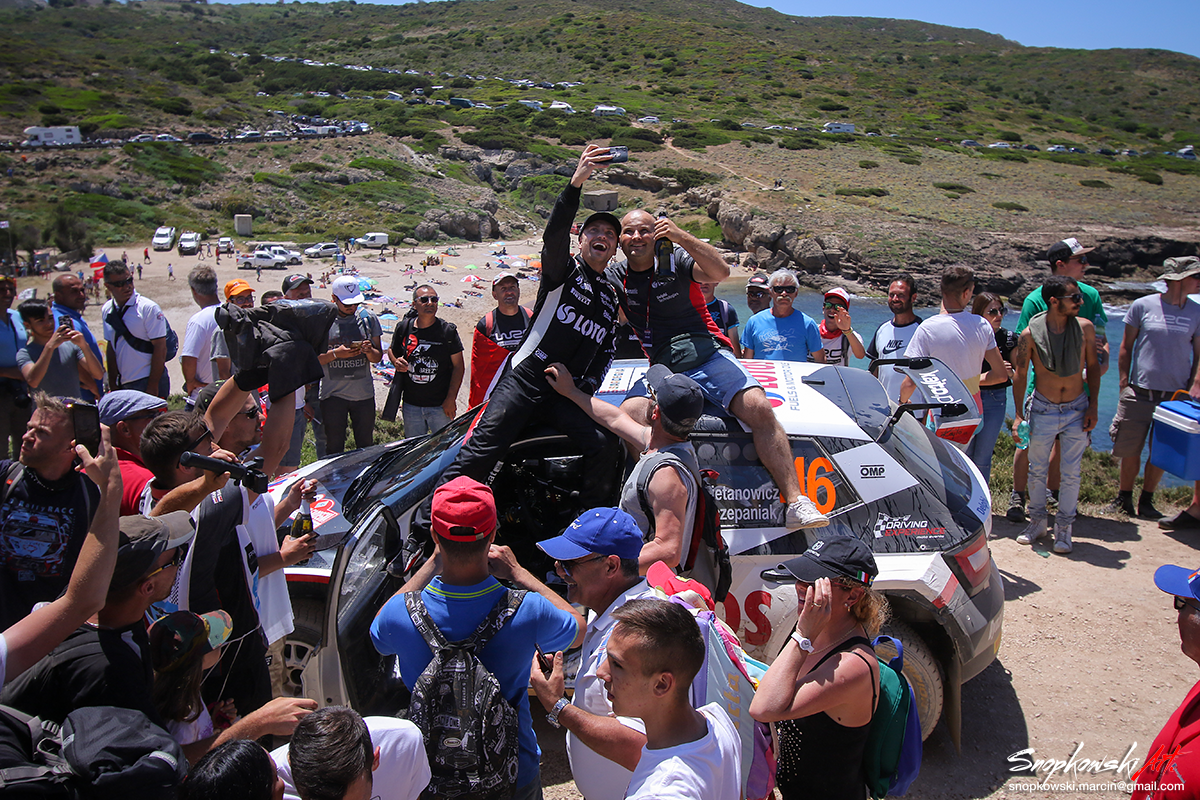 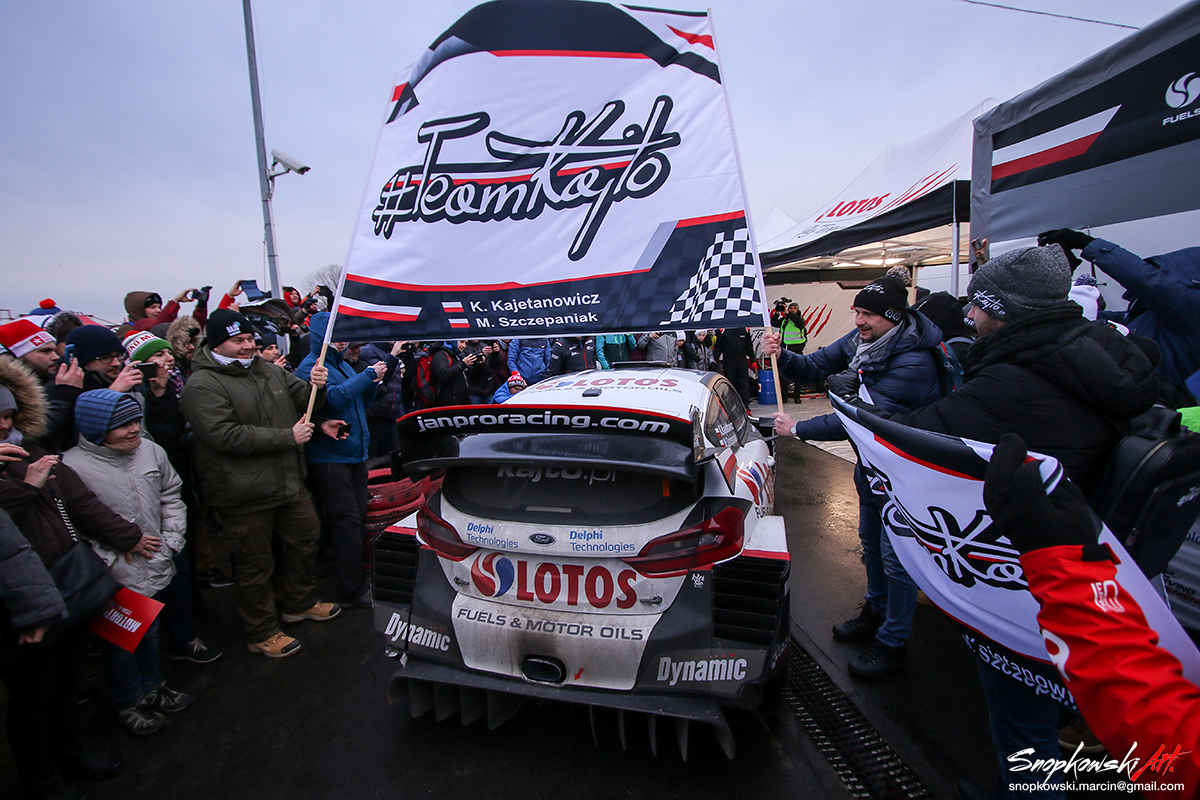 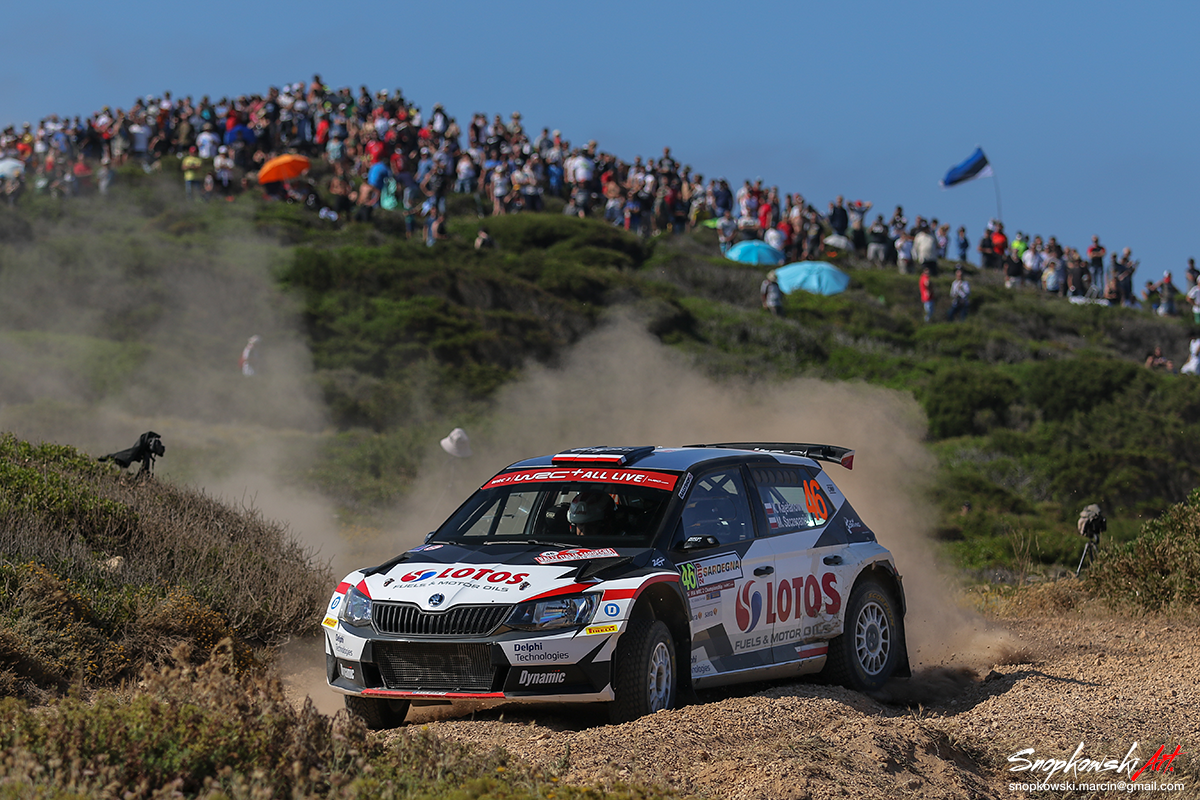 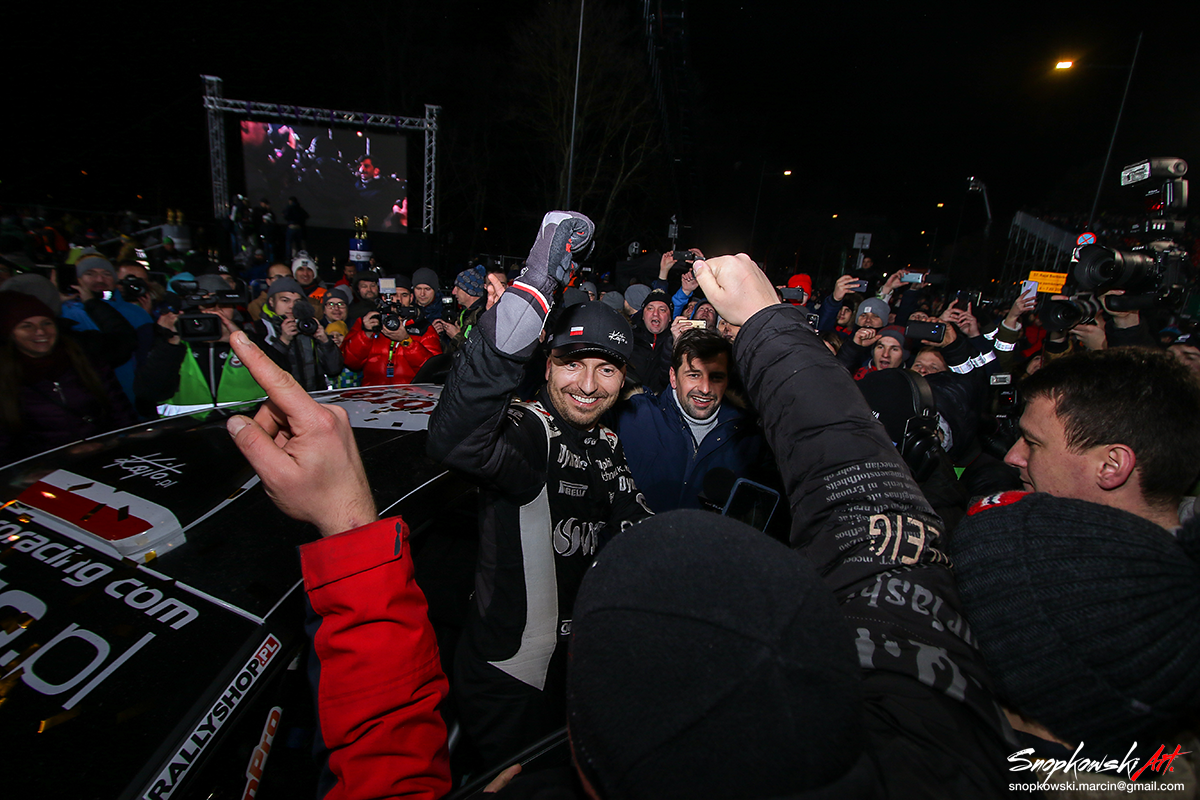 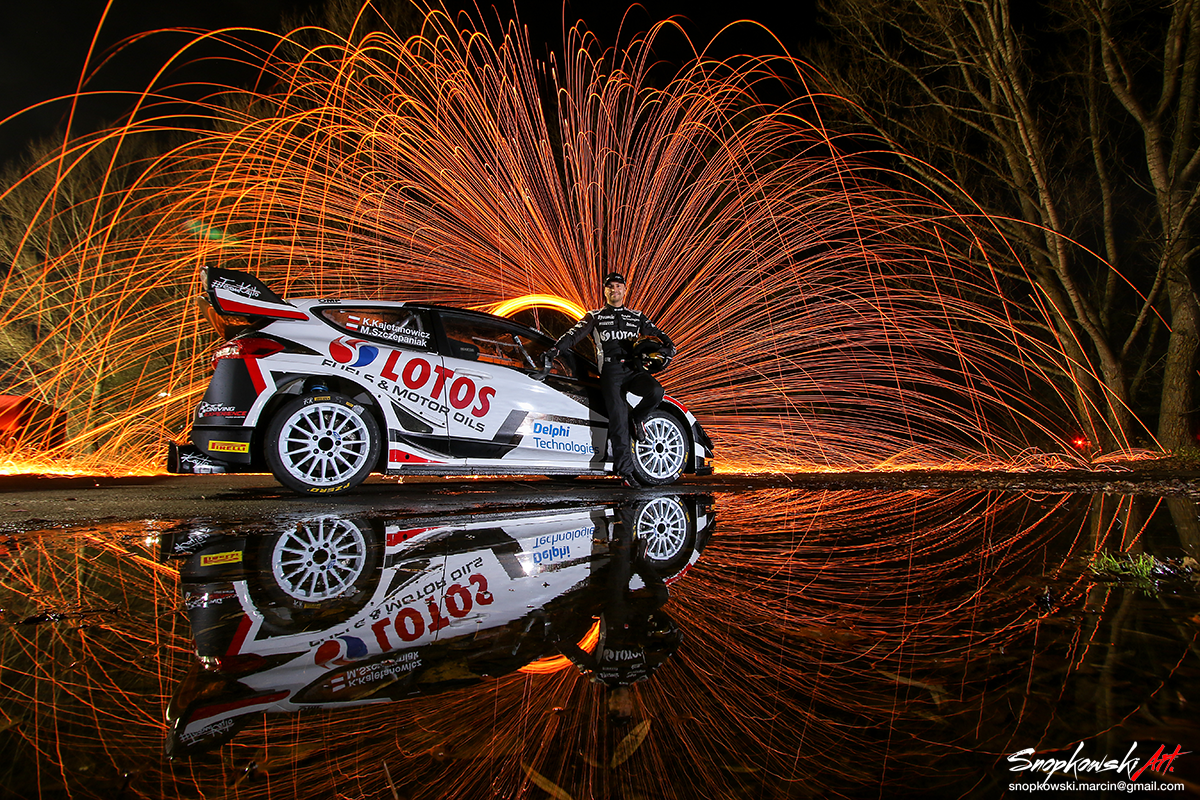 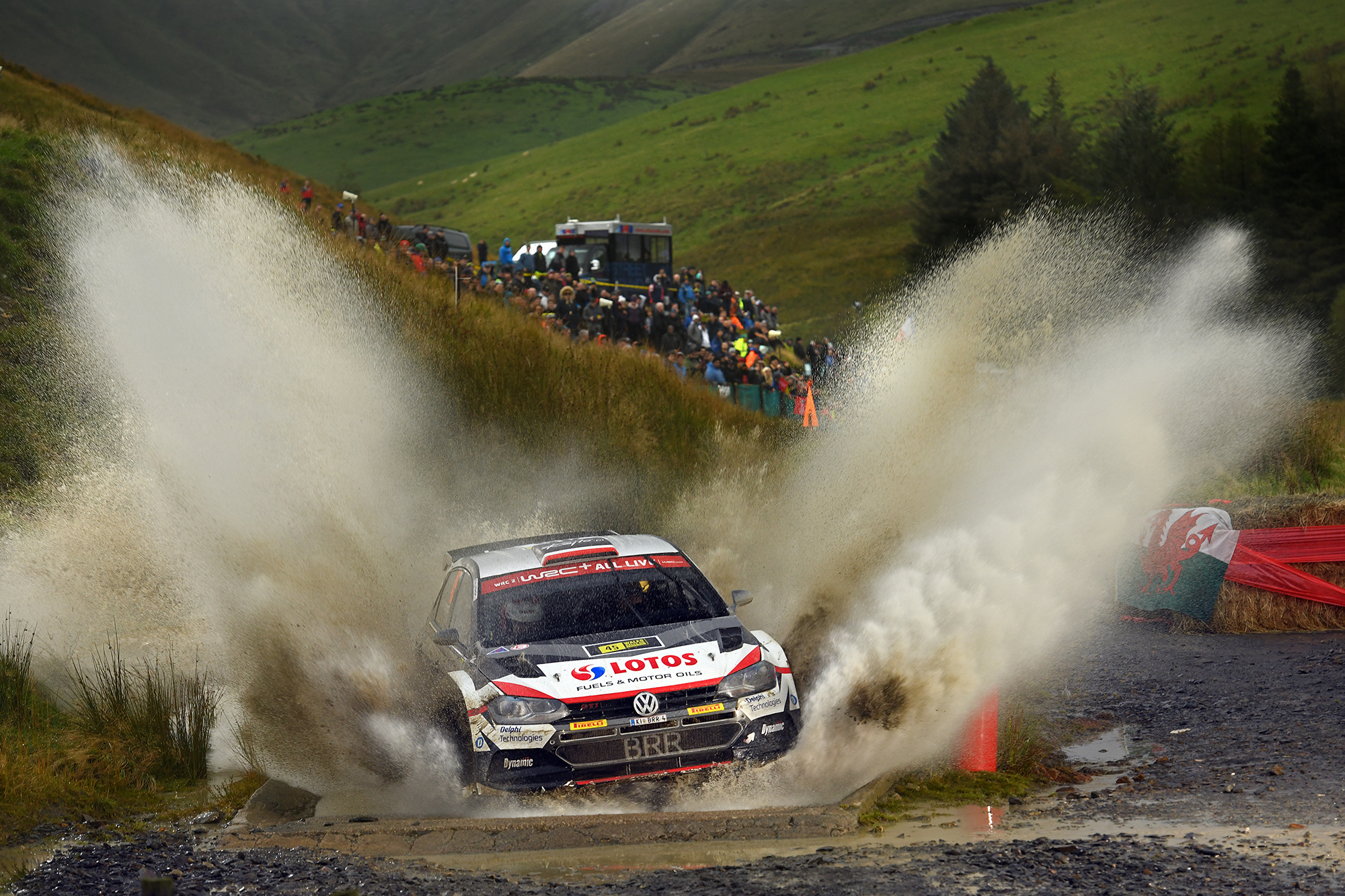 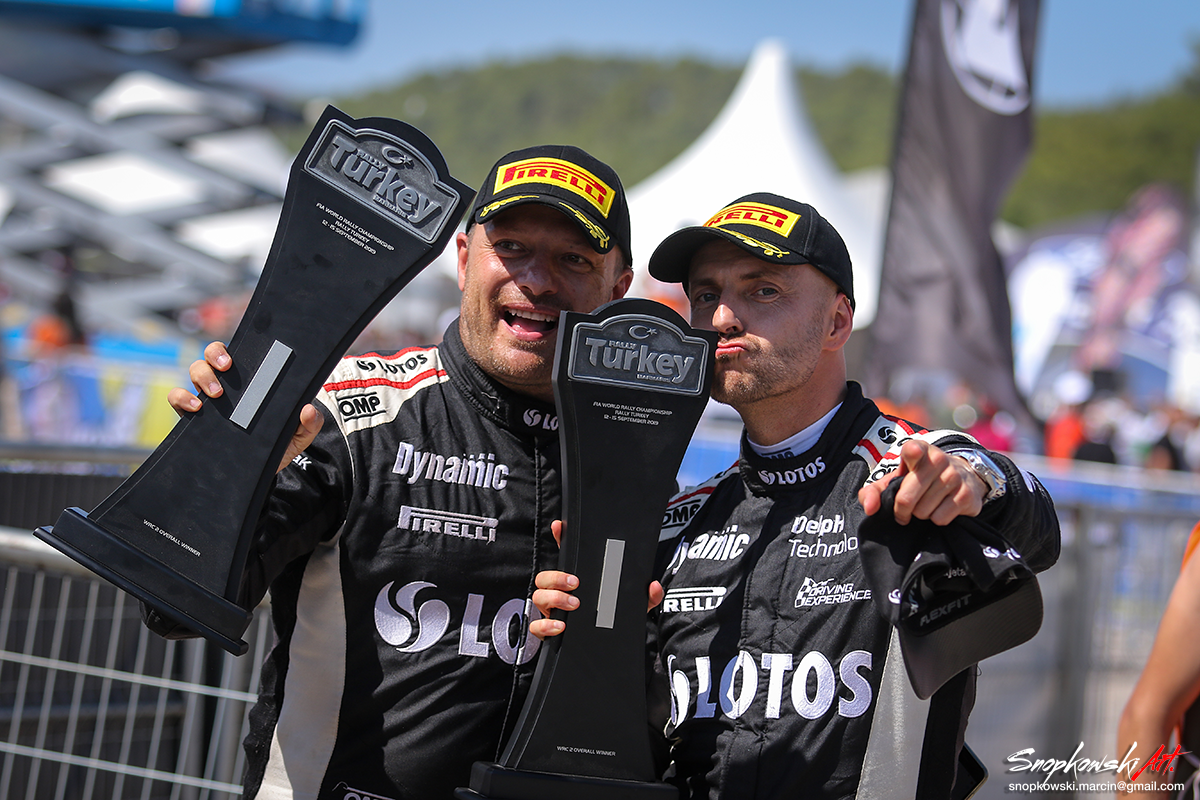 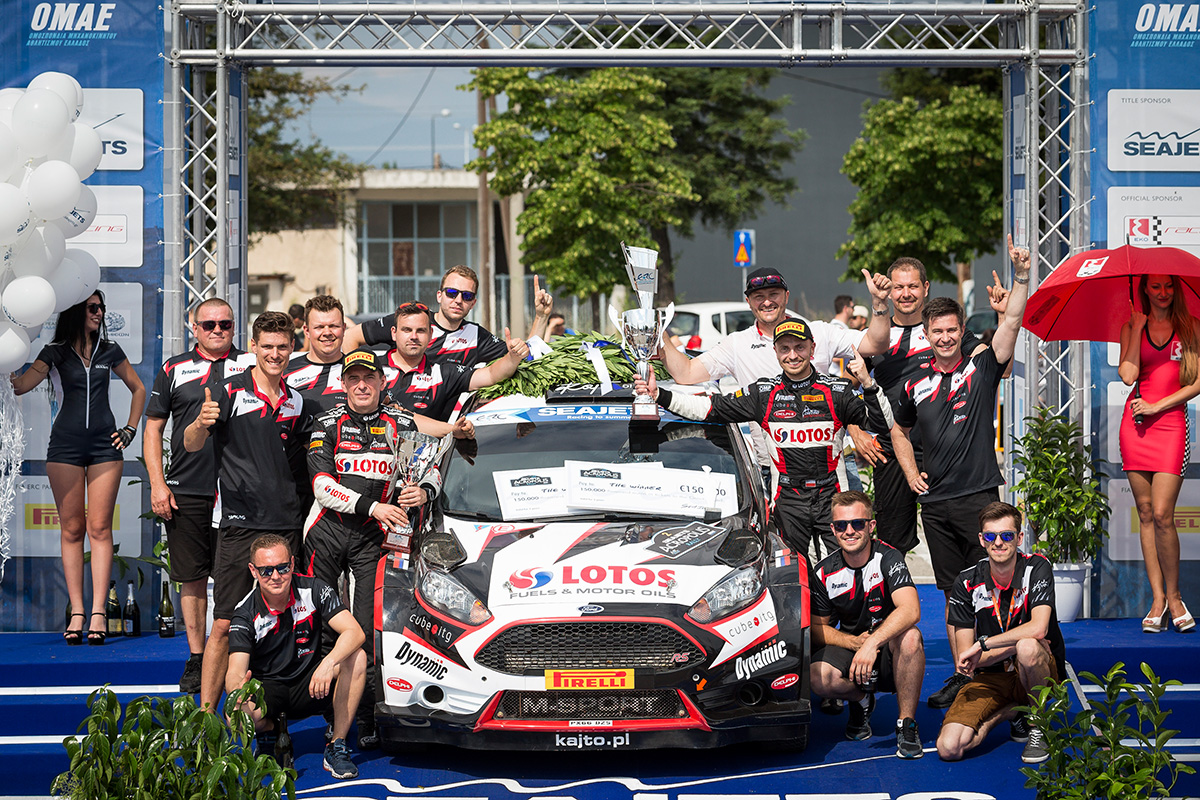 his family and rallies

use slicks while it’s raining

work and effort of others