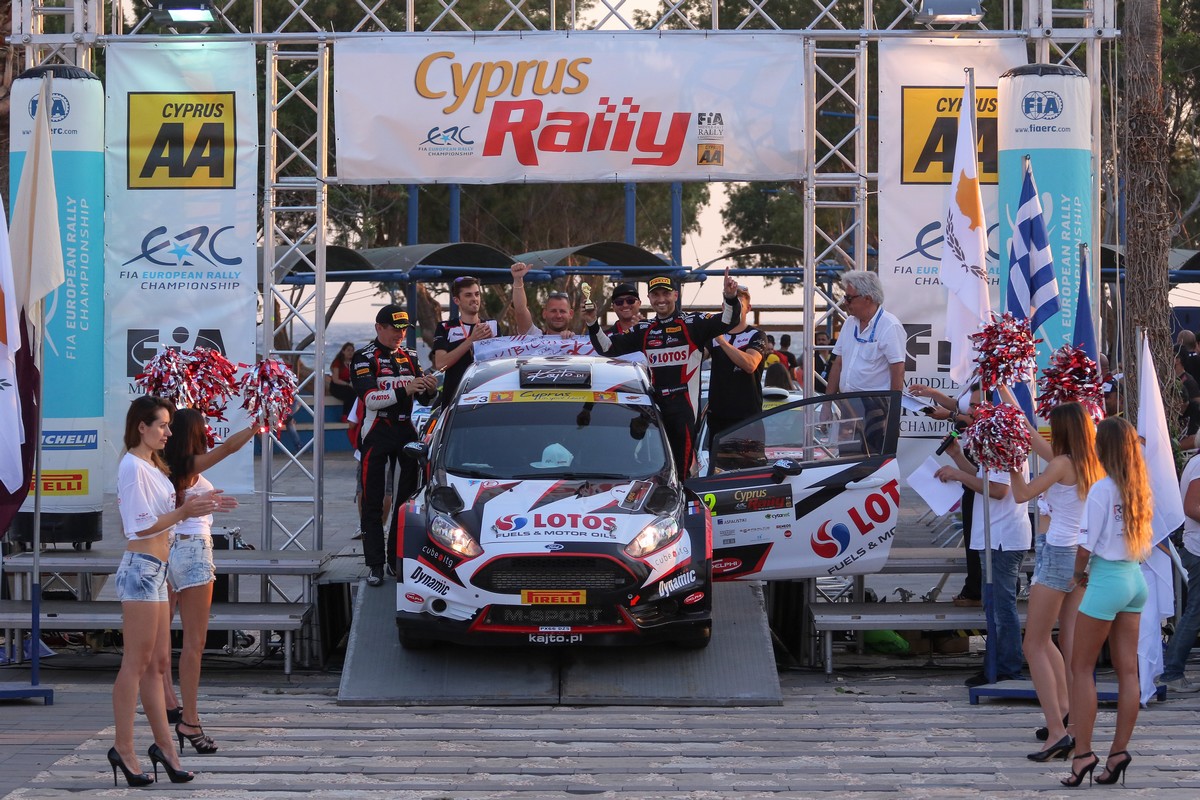 Kajetan Kajetanowicz and Jarek Baran put on a masterclass performance on today’s stages of Cyprus Rally. The LOTOS Rally Team duo won three out of six tests, recording second-fastest times on the remaining ones. This fantastic effort brought them victory in Leg 2 and maximum amount of points that were up for grabs today. Thanks to their determination and fight until the end, reigning European Rally Champions not only maintained second position in the FIA ERC standings but also closed the gap to the overall leaders.

Mix of sandy, soft parts with asphalt parts was very demanding for the competitors and their machines. Kajetanowicz and Baran did not give up after yesterday’s problems and returned to fight, setting the pace right from the beginning. They started with two stage victories, carving out almost one minute advantage over their rivals. Afterwards they set a string of second-fastest times, winning the final test: extremely spectacular Love Cyprus Golden Stage 2. Thanks to this performance Kajetanowicz raised his stage wins tally in the FIA European Rally Championship to 115.

The event, based in Nicosia, over 2.100 kilometres away from the capital city of Poland, was won by Al-Attiyah and Baumel (Qatar/France, Ford Fiesta R5). The characteristics of the route resembled the famous Dakar Rally: conditions in which the Qatari driver feels like at home – he won this event twice and wrapped up three titles in Cross Country World Cup. The podium was completed by local crews from Cyprus: Galatariotis and Ioannou (+6:12.0 seconds, Mitsubishi Lancer Evo X) in second position and Polykarpou and Winter (+6:19.5 seconds, Mitsubishi Lancer Evo IX). Kajetanowicz and Baran finished in fifteenth position overall, moving up by 17 places today!

Bruno Magalhães remained in the lead of the overall classification of the 2017 FIA European Rally Championship, although he crashed out and did not finish the Cypriot counter. The Portuguese driver scored 93 points and his advantage over Kajetanowicz has decreased to just 14 points (the Polish driver has scored 79). The top three is completed by Alexey Lukyanuk (Russia, 46 points), while Nasser Al-Attiyah moved up into fourth position. Fifth place is shared by Marijan Griebel (Germany) and José Maria López (Spain) – 27 points each.

– We were winning special stages today and generally whole Sunday in Cyprus Rally belonged to the LOTOS Rally Team. We proved again that we never give up although it is not so easy when you encounter problems. Nasser drove very well today and I could learn a lot from him. I am always grateful to such drivers. Even though they do it unintentionally, for me it is a huge lesson when I compete against such experienced and fast drivers. We scored seven points and I am proud of my team members’ work because they did their best. We are closing the gap to the leaders and we are ready to fight in Rally Rzeszów.

– After all things which happened to us yesterday it would seem rather trivial to say that it was the most difficult rally I can remember. However, this is rallying and probably there would be some other difficult ones. I am very happy that today we regained self-confidence and pace, winning the day. Big thanks to our mechanics who worked very hard and long hours to get the car out of a really deep hole. Thanks to them we scored seven points which are and will be very important in whole battle this year.