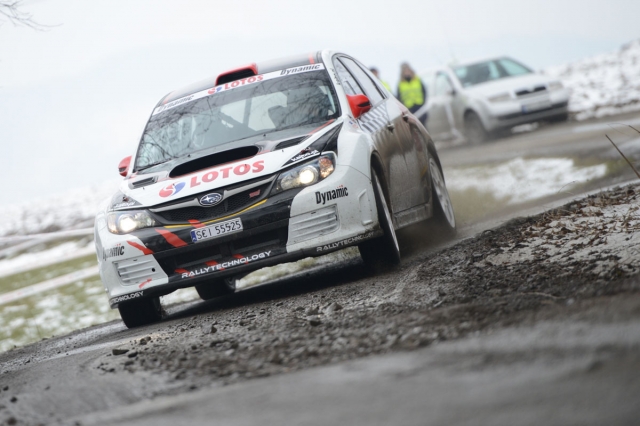 We are a few days away from the start of the LOTOS Polish Rally Championships 2013 season – Swidnicki Rally. The winners of last year’s edition of the event Kajetan Kajetanowicz and Jarek Baran received the first starting number and lead the field of dozens of crews that entered the first round of the national championships.
The current triple champions representing LOTOS Polish Rally Team talk in a brief interview about the competition awaiting us on the 14 special stages set out in the Owl Mountains.

What emotions accompany Polish Champion a few moments before the start of the new Polish Rally Championships season?
Kajetan Kajetanowicz – Extraordinary! I’ve been waiting for this moment for a long time and really can’t wait to once again get into the rally car, tighten the belts, shift into first gear, lock differentials, wait for the green light, and finally off we go to the Swidnicki routes. We have rally hunger and eagerness to compete. Although this year we have already one start behind us – in Janner Rally, round of the European Championships – but a three months break is forever to me.

Right… Janner was supposed to be a winter rally, while the routes in Austria in January were like mid-April in Poland. How much influence such a weather and conditions have on driving?
Kajetan Kajetanowicz – When competing in rallies you always have to be vigilant. But the conditions which we expect on the special stages of Swidnicki Rally require absolute concentration and making good decisions with the choice tires for the entire stage. With uniform conditions tire choice is quite simple, then when we expect on the route tarmac, snow and in some places even ice, our decisions sometimes may seem controversial. I think we will appreciate the role of rally route reconnaissance vehicles, that can help players by driving special stages routes 1.5 hour before the start. When you compete for a fraction of a second any information on the road situation is valuable. It has the influence on our security, safety, and thus the speed – that’s the whole point for us.

The fans are an integral part of every rally. Is Swidnicki Rally anyhow exceptional in this aspect?
Kajetan Kajetanowicz: – That’s right. We have reasons to be proud of due to the great interest from fans at every rally. Swidnicki opens the season this year, so I expect the supporters to have a bigger rally hunger than usually. But that’s great – I do hope so hungry for competition, as we will be, they will give the crews on the track a bigger kick. Information I’m getting from my friends show, that the numbers of fans coming here is huge, as there is no accommodation left in the city.

Jarek, does the break between seasons make you miss the adrenaline that rally competition provides?
Jarek Baran: – In my life there is no shortage of adrenaline, but I’m glad that the preparation is over and the rally season starts. The traditional date of competition in the Sowie Mountains fell on mid-May. It was warm, very spring and positive. This year Świdnicki will be held earlier and everything indicates that small Monte Carlo awaits us. As always start in this rally is a nice experience for me. It’s a unique place on the rally map of Poland.

This year the organisers have prepared a modified route Swidnicki Rally. How do you like this year’s configuration?
Jarek Baran – Swidnicki Rally has two stages, seemingly similar, but I think the first day will be more difficult. We’ll drive two long stages, in places very narrow, difficult and technical. Everything points to the fact that there will be snow in many parts. And even if there will be snow, the road will remain very dirty and slippery. The second day, at least for me, is very classic. However, it doesn’t mean it will be easy. I’m glad the prologue is still on the streets of Swidnica.