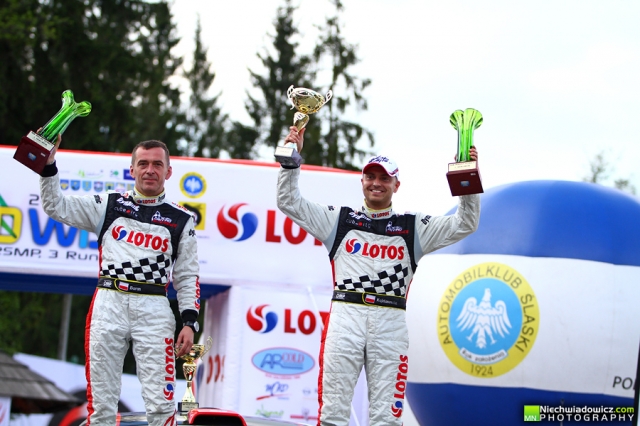 Kajetan Kajetanowicz and Jarek Baran (Subaru Impreza) of LOTOS Rally Team won the second in a row round of Polish Rally Championship and gaining a set of points took a lead in general classification with 30 points advantage over the rivals. The crew and the team were successful at one of the most difficult special stages in Poland. They won having 3-minute advantage over their rivals in Super 2000, RRC and R4 cars, being watched by their neighbour and friends, who often witnessed Kajetanowicz’s beginnings.

Kajetan Kajetanowicz It’s incredible to start and win the rally my dad used to take me to. As a teenage rally fan I watched this rally, which returned after 11 years to Polish Rally Championship. Such emotions, with accompany me I have felt only a few times so far in the most important moments in my life and that’s the way I treat this success – as if it was something absolutely special, making my dream come true. My happiness comes not only from sentiment, but also from the fact, that I saw how many fans enjoyed this rally during special stages. We have fantastic team, which works hard. I realize how much effort they must put in, to be able to drive so fast in this car. From driver’s point of view the pure pleasure comes from these narrow, winding routes ant the weather which made the stages more unpredictable.