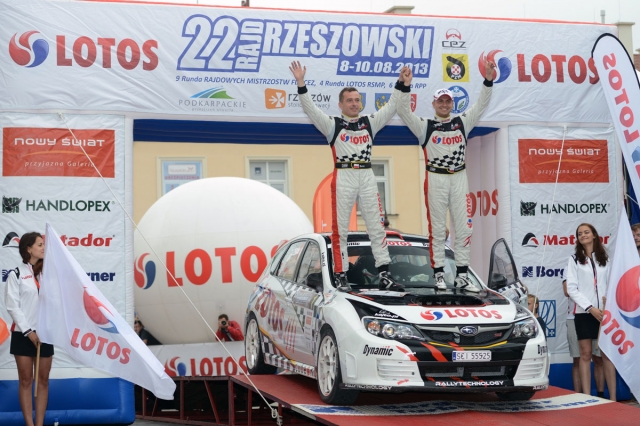 Kajetan Kajetanowicz and Jarek Baran finished the fourth round of Polish Championships in style, standing on the top of the podium for the fourth time this season. Triumph at Rzeszowski Rally is a repeated last year’s success, but also another win in a tarmac rally. In two seasons LOTOS Rally Team crew won all the 10 tarmac rounds. Tonight will be another opportunity to celebrate – Kajetan’s victories in the national championships came of age – he won 18 times.

Kajetan Kajetanowicz Driving the whole weekend was a big challenge, the heat gave a hard time to our rally car and to us as well. On the second day we quickly caught up the few seconds lost to the leader on Friday. We didn’t pass up at all, although it was not easy. We came here to fight for a victory and we got it after a fierce rivalry. Even though it’s colder today, our determination and excitement didn’t cool off. I wouldn’t be proud of a success like this, if it didn’t require me to work so hard and make a lot of sacrifices before each rally. After the tarmac part of the season we have two rounds ahead – in Lithuania and the round of the European Championships in Mazury. Both gravel surface. I know that fans like a puff of sand and surely many will not absolve from coming. So see you there!