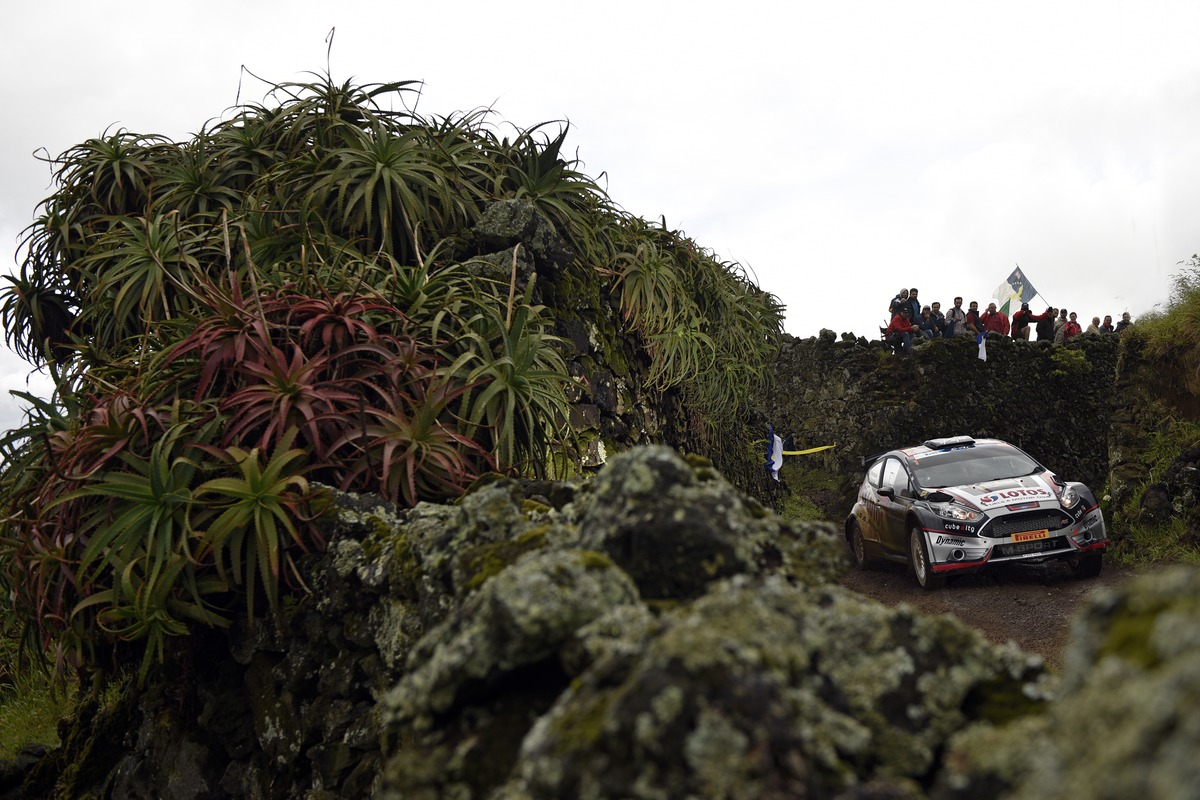 The Azores Airlines Rallye: Kajetanowicz among the frontrunners in the Qualifying Stage

Kajetan Kajetanowicz and Jarek Baran began the competition on São Miguel Island in a fantastic way. Yesterday evening they topped the popular Ponta Delgada City Show – thousands of fans witnessed their second victory in a row on this spectacular test staged late evening on slippery streets of the capital city of the Azores. Today the crews moved to picturesque gravel roads of the Portuguese island. The battle started with the Qualifying Stage and its outcome determined the order of road position selection for today’s stages. The European Rally Championship leaders confirmed their excellent form and recorded second-fastest time on 3-kilometres Remedios test, known from the previous edition of the Azores Rallye. This marks sixth top-three result in a row and 15th overall for the LOTOS Rally Team crew on the FIA ERC Qualifying Stages. 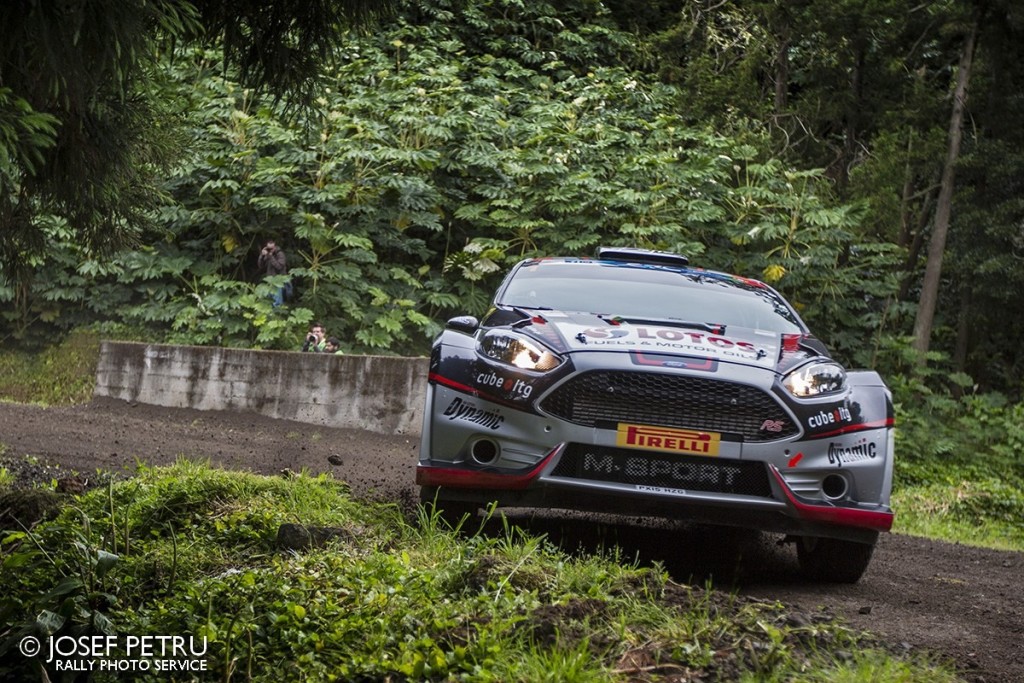 The reigning European Rally Champions defeated the winners of the previous FIA ERC round – the Latvian crew Ralfs Sirmacis and Arturs Simins – and multiple rally champions of the Azores, Ricardo Moura and Antonio Costa duo. The Norwegian rally champions, Frank Tore and Torsten Eriksen, had also lost the battle against Kajetan and Jarek. Leading result of Kajetanowicz meant that the Pole chose his starting position for the opening stages as the second driver in the FIA ERC field. The championship leader picked 12th position and Alexey Lukyanuk – his main rival and second-placed driver in the championship – chose 15th position. This decision is a crucial part of the strategy in gravel rallies: it is important to avoid “cleaning” the road of loose gravel and also at the same time to avoid driving on the road destroyed by preceding cars.

Today the competitors face four special stages. The first one – Batalha (7.27 kms, 74% gravel and 26% asphalt) – starts at 17:57 CET. The Thursday leg ends with fight in a quarry – on Grupo Marques test. This spectacular stage is a great viewing opportunity for the fans who can watch two cars competing head-to-head. The battle on this stage will be streamed online (http://www.azoresrallye.com/live/ ). Kajetanowicz and Baran are undefeated on Grupo Marques test since their first start in the Azores: the Polish crew notched up four stage wins in the quarry.

Kajto and Jarek start the battle for victory in round four of the FIA ERC with comfortable lead in the championship. The Polish duo so far scored 25 points more than their closest rivals, Lukyanuk and Arnautov. The LOTOS Rally Team enjoys the 13-points lead in the FIA ERC Teams standings. 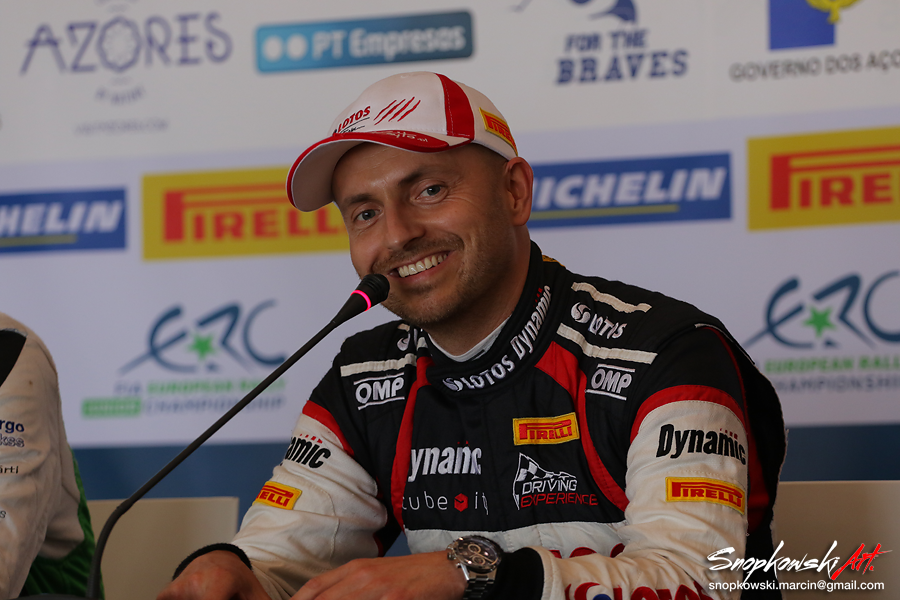 Kajetan Kajetanowicz We have just finished the Qualifying Stage. I think that our pace was good. We took most of the corners on narrow, wet road in fourth or fifth gear. This was a difficult but strong beginning. Lots of emotions, so the adrenaline went quite high. We could choose our starting position as one of the first crews, so it is OK. This was the plan. The rally is set to be quite extreme, as it is supposed to rain overnight. However, before the night we still have four stages to go – each of them is different, with changeable surface. It will be difficult to drive fast on every stage and win all of them because our tyre choice will work well on one stage, less so on another and then OK again. You cannot get an optimum choice. I think we should approach this rally with right mental attitude. This event is so diverse that one driver will not win all stages. I am sure about that.