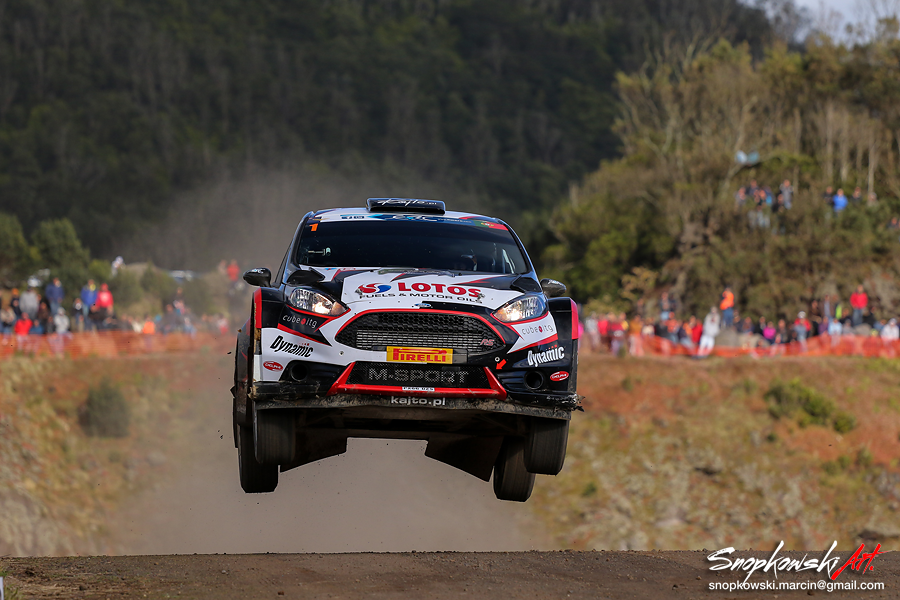 Incredible pace and perfect tactics allowed Kajetan Kajetanowicz to seize the lead after fierce battle on Day 1 of the Azores Rallye. The LOTOS Rally Team driver, co-driven by Jarek Baran, tops the overall standings of the unique FIA ERC opening round, held in the middle of the Atlantic Ocean. Kajto finished the day with his fifth career win on Grupo Marques test, raising his stage wins tally in the European Rally Championship to 100! This is a great success, as he faces record-breaking opposition in this round, with no less than 28 cars in the top category.

Over the course of today’s four special stages the weather was nice and mostly sunny but persistent rain during the last couple of days meant that there were many damp and tricky places along the route. It made the starting position even more important and Kajetan had first choice thanks to his Qualifying Stage victory. He picked position number fifteen and showed very good pace, recording one win and two runner-up spots with slender losses of just 0.1 seconds!

The final test proved to be decisive: in the last few years Kajto was virtually unbeaten on Grupo Marques superspecial and it was no different this time. He won with comfortable advantage of 1.9 seconds over Ralfs Sirmacis and of 2.0 seconds over his biggest rival Alexey Lukyanuk.

After Day 1 Kajetanowicz enjoys 1.1 seconds advantage over Lukyanuk and 13.8 seconds over third-placed Ricardo Moura. Top five is completed by Sirmacis (+17.3 s) and Bruno Magalhães (+19.5 s). Tomorrow the crews will tackle over 80 competitive kilometres divided into six special stages. Among them there is famous Sete Cidades test: the longest one of the rally (25.62 kms), running partially along the rim of a volcano.

– We are leading the rally and although I should not be supposed to say that I am a bit surprised, this is what I feel. Great fight, many very fast drivers, very changeable conditions. Perfect tyre choice was basically impossible, you have to choose a compromise. We are leading, this is very important. I enjoy every second because this rally is very difficult. I had not expected that after such a long break I would be able to drive so fast on gravel. As always, the whole team do the best job possible and work very well. We have been working together for a long time and maintaining such a high level of performance is a testimony to their professionalism. Working with them is a real pleasure!