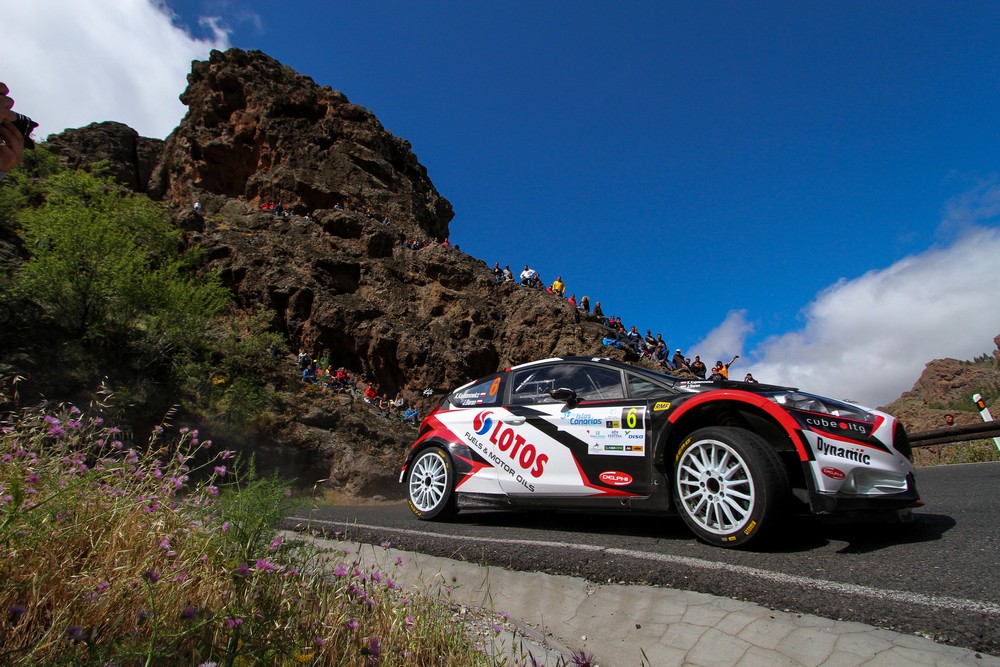 The opening day of Rally Islas Canarias has come to an end. Unusual, exotic event based in Las Palmas is run as round two of the 2017 FIA European Rally Championship, in which Kajetan Kajetanowicz and Jarek Baran fight for record-breaking third title in a row. The LOTOS Rally Team crew showed assured and efficient performance in changeable conditions today, holding high, third position with narrow gap to the leaders. The field in this year’s event is extremely tight: after almost 100 competitive kilometres top ten crews are separated by slightly over one minute!

On the second loop the competitors repeated San Mateo stage (25.13 kms) and then moved into Mirador de Artenara (14.38 kms) and Las Palmas De Gran Canaria (3.30 kms) tests. Weather conditions on today’s route were changeable, ranging from fog to clear, sunny sky, with intermittent rain showers. The day ended with a city superspecial with huge crowds alongside the road. There were plenty of spectators around each corner, watching very interesting and fierce competition.

The Russian driver Alexey Lukyanuk (Ford Fiesta R5) leads after day one, with 25.7 seconds advantage over the winner of the opening round this season, Bruno Magalhães (Portugal). Kajetanowicz made up some time on the final stage and trails the Skoda Fabia R5 driver by just 2.2 seconds. Top five is completed by Spanish duo, Iván Ares (+35,3 secs, Hyundai i20 R5) and José Maria López (+35.7 secs, Peugeot 208 T16 R5). Thanks to his third position, Kajto added five points to his championship tally.

Tomorrow the route consists of almost 110 competitive kilometres divided into six special stages. Among them there is Moya test, the longest stage of the rally – at 25.20 kilometres.

– Gaps among the frontrunners are very small and although the field has become a bit thinner, top drivers are still going, very fast. I am happy because fight with them is a huge pleasure. We are constantly developing our knowledge about the stages, tyres and grip. We are working on various things with the whole LOTOS Rally Team. Grit plays an important role in this rally and I think that so far everything works well. I might be overambitious because I should be more happy with top three position after day one, but I still feel rather hungry. Maybe I could have a broader grin on my face, with this tight battle and such a strong and evenly matched field. We completed the day with a city superspecial watched by huge crowd of fans and the show was great. Fantastic thing, as we compete also for them.

Classification after SS6 of Rally Islas Canarias, round two of the 2017 FIA ERC: