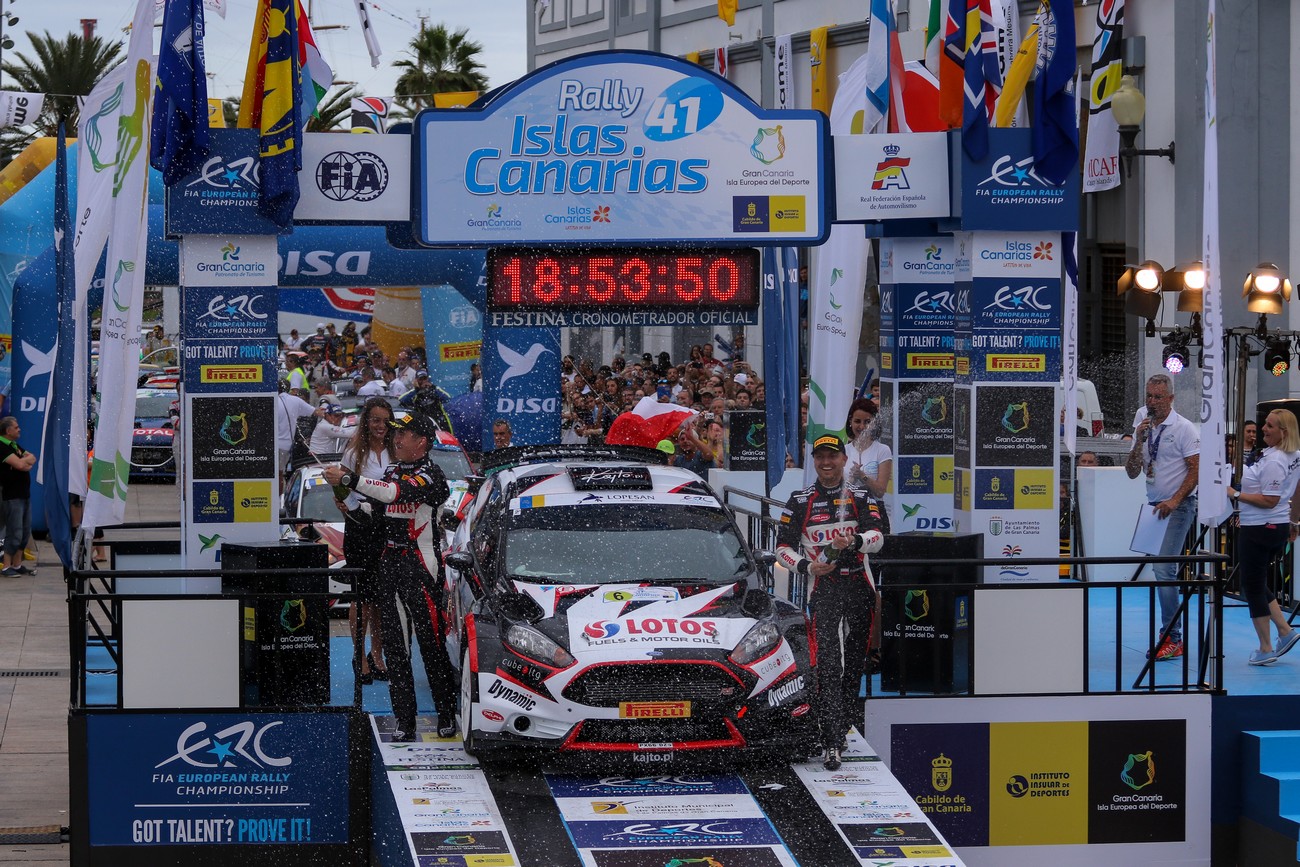 Kajetan Kajetanowicz and Jarek Baran finished Rally Islas Canarias in style, claiming excellent second place in overall standings. Fierce and evenly matched battle in round two of the 2017 FIA European Rally Championship was fought with fantastic support of local and visiting rally fans. It was second start of the LOTOS Rally Team crew in Gran Canaria and another strong result. The Polish duo defeated all local competitors and with their efficient and precise driving gained a lot of championship points which enabled them to move up into third position in the 2017 FIA ERC standings!

Today’s leg once again surprised the competitors with changeable weather. The special stages in north-eastern part of island were run both under clear and sunny sky and in thick fog which limited the visibility to tens of metres. It raised the adrenaline level and excitement of competition, watched again by huge crowd of fans, also from Poland.

Dynamic pace and flawless performance of the LOTOS Rally Team resulted with six top three times out of 12 special stages, including two wins. Competition in this year’s FIA ERC is extremely tight: no less than 27 crews in top R5 cars entered the event in the Canary Islands and there were 125 crews in total, from 18 countries.

The final loop of the rally was also eventful. Kajetanowicz won the penultimate test, which brought his European Rally Championship stage wins tally to 105. Plenty of points scored for runner-up position in overall classification, as well as for second and third place in both legs, enabled him to move up to third position in the Championship. Kajto has 35 points to his name and the Portuguese driver Bruno Magalhães, who finished the rally right behind Kajetanowicz, continues to lead the standings with 63 points. The Russian Alexey Lukyanuk holds second place (46 points). Round three of the series takes place in Greece, on stages of the legendary Acropolis Rally. The event takes place in less than one month’s time, on 2-4 June.

– This was a very exciting rally, second place with such fierce competition and difficult fight is something special. It is a fantastic event, not only because of these unique special stages. Plenty of fans, really hot atmosphere – not just due to high temperatures and hard work, but also thanks to lots of emotions shared by the spectators. Of course I feel a bit hungry, as I’d love to win every rally, but it is not always possible. We will try to improve, here we made some small steps forward which enabled us to defeat all local drivers. I was very pleased with my driving today but for sure there is still room for improvement. I’d like to thank the whole LOTOS Rally Team for doing great job. We are on the right track in our fight for another Championship title.

– We were working really hard this weekend. We scored some stage times which give us right to be proud of and second place among such competitors on asphalt is a very good result. We moved to third position in the European Rally Championship standings. The gaps between frontrunners are small and this season is shaping up in really exciting way.

Final results of Rally Islas Canarias, round two of the 2017 FIA ERC: