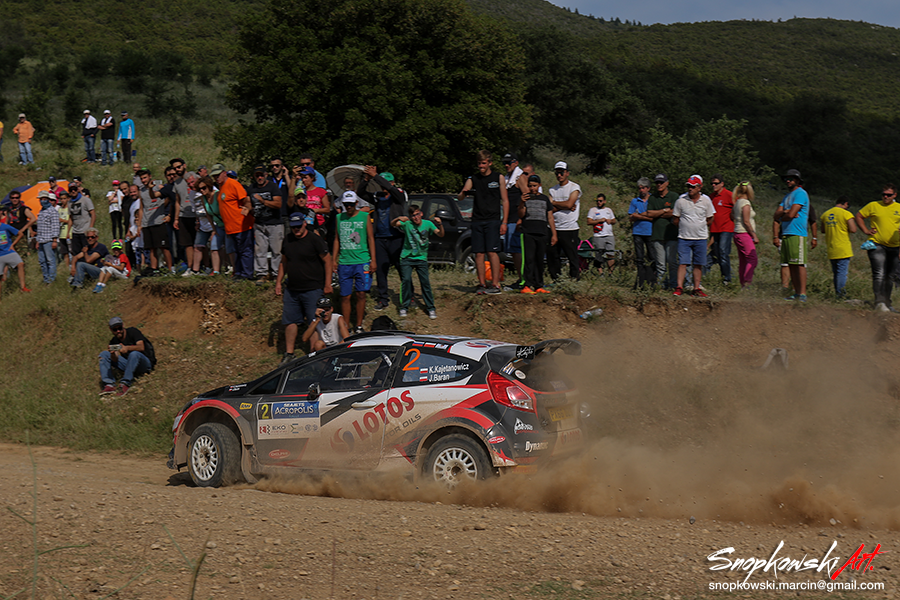 Incredible beginning of the final leg of Acropolis Rally for Kajetan Kajetanowicz and Jarek Baran. The LOTOS Rally Team duo won the opening stage and recorded second fastest times on another two tests. Excellent pace of the Polish competitors enabled them to take the lead in round three of the 2017 FIA European Rally Championship! The Ford Fiesta R5 duo have built over 20-seconds gap over the following crew.

Today’s stages are exhausting for competitors and cars alike. The elevation change exceeds one thousand metres and the roads require perfect preparation and full focus. Kajto started the Sunday’s fight in truly masterful style: winning the first stage with over nine seconds advantage over the FIA ERC points leader Bruno Magalhães. Erstwhile leader Nasser Al-Attiyah stalled his engine on the opening stage and lost over two minutes, trying to restart the car.

Flawless and very fast driving on another two stages resulted in two runner-up spots for Kajetanowicz. He beat the Portuguese leader by over 30 seconds and claimed the top spot in overall standings with 20.6-secs advantage over his main rival. Al-Attiyah holds third position (+1:15.7), fourth place belongs to Murat Bostanci (+3:31.0) and Philippedes is sixth (+3:52.6). Double European Rally Champions heads also Day 2 standings, with more than 40 seconds in hand.

The crews face another run of the morning’s loop: over 63 kilometres of extremely difficult roads south of Lamia. The event ends with the longest stage of the rally, Elatia/Karya (33.86 kms). The winners of round three of the 2017 FIA European Rally Championship will reach the finish at 14:00 CET.

– It is a very nice feeling, to lead one of the most difficult rallies in the world. However, I have to remain focused all the time, there are still many kilometres to go. It is not easy to maintain concentration and drive at 100% in such difficult conditions. The grip changes very fast. For example the opening stage was muddy but it dried towards the finish. Everything can happen here. I have to watch the road, push as much as possible and think about things which depends on me.