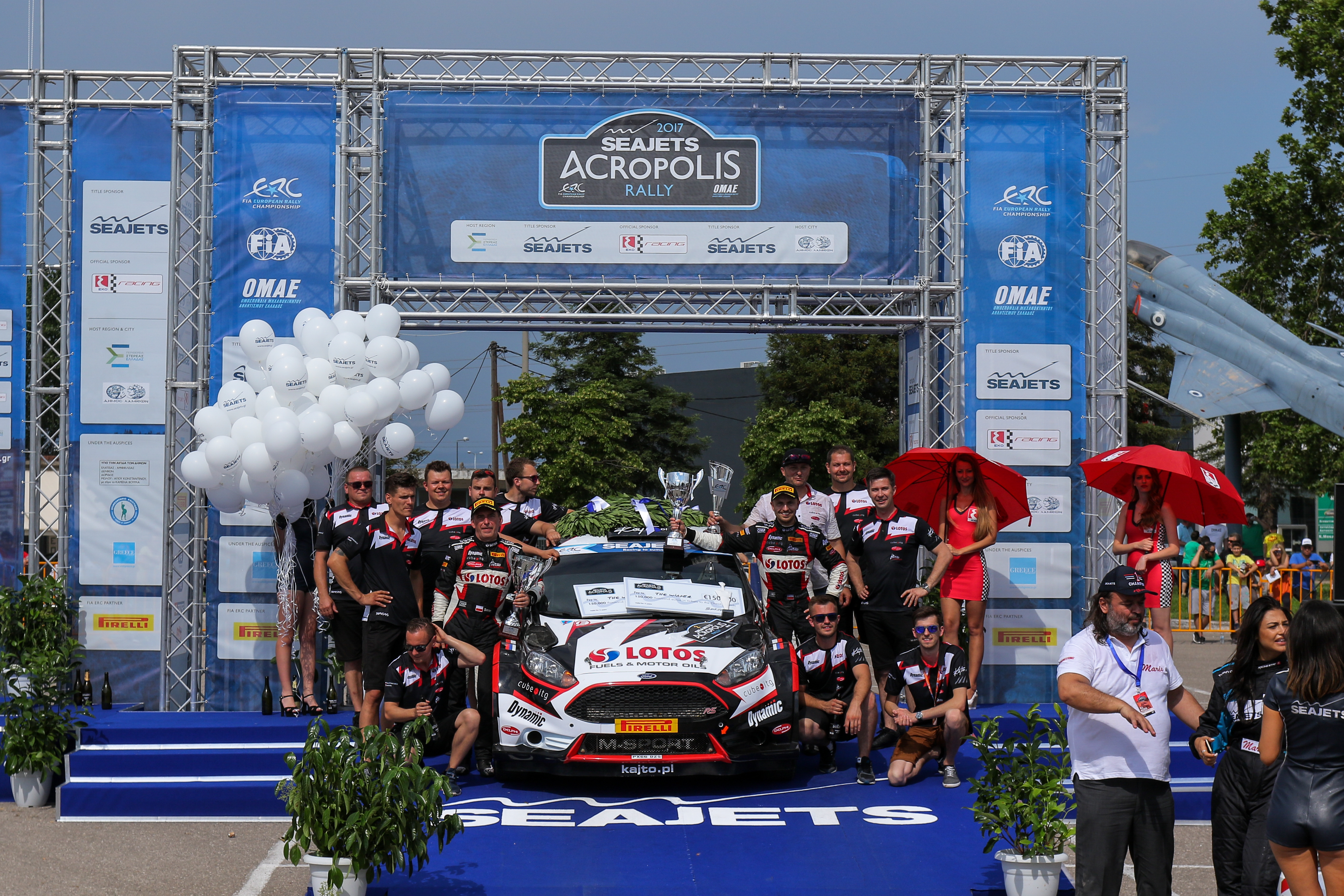 Second victory for Kajetanowicz and Baran in the iconic Acropolis Rally!

Kajetan Kajetanowicz and Jarek Baran after fantastic, masterpiece performance win Acropolis Rally, one of the oldest and toughest events in the world. The LOTOS Rally Team crew recorded top three times on nine out of twelve special stages, winning seven of them in great style. This is their second victory in this over 60-years old rally – they scored the first win here in 2015 and finished in third position the year before. This result means that the Polish crew moved into second place in this year’s FIA European Rally Championship classification.

The final loop confirmed the excellent shape of the Polish crew. Kajetan and Jarek won all the stages, increasing their advantage by over one minute. Exceptional performance of Kajetanowicz brought his FIA ERC stage wins tally to 112. It is a huge success for the whole LOTOS Rally Team, achieved against very strong international competition.

Kajetan Kajetanowicz moved into second position in the 2017 FIA European Rally Championship standings, with 72 points to his name. Bruno Magalhães maintained his lead (93 points), while Alexey Lukyanuk (46) lies third, ahead of José María López and Marijan Griebel (both 27).

The FIA ERC competitors do not have much time to rest. The next championship round, Cyprus Rally (16-18 June) takes place in just two weeks’ time. Afterwards the crews will visit Poland, for Rally Rzeszów (3-5 August). The next round of this great battle is Rally Barum in the Czech Republic (16-18 August), followed by a new round in Italy: Rally di Roma Capitale (16-17 September). The season end in Latvia, with Rally Liepāja (6-8 October).

– We did it, we won one of the toughest rallies in the world for the second time. Dreams come true – it is worth chasing them, push the pedal to the metal and never give up. It was not perfect yesterday but we were focused on our job. We had problems but we deflected them like a ball. I want to stress that I put a lot of effort in that – both ahead of the event and during this competition, so I am a bit tired 🙂 There are things we have no influence on and it is difficult to deal with them but you have to try. Huge thanks for my LOTOS Rally Team and for everybody who put his faith in us. Thanks to the fans, supporting us here on site and from behind their computer screens. Physically it was an extremely demanding rally and I am looking forward to the future with wide smile on my face.

– It is a great, heart-moving experience. Acropolis Rally is a legend, a truly incredible event. Everyone who had a chance to face is already a hero. At the beginning of my career such experience was absolutely unimaginable for me. I could not even dare to dream about competing here. Our double victory here is something really remarkable. I would like to dedicate the success in one of the most difficult rallies in the world to my father who had his birthday recently. It is my slightly late gift for him. He pushed me towards this rally path and I guess it is the best thing I can give him back today. Thank you very much.