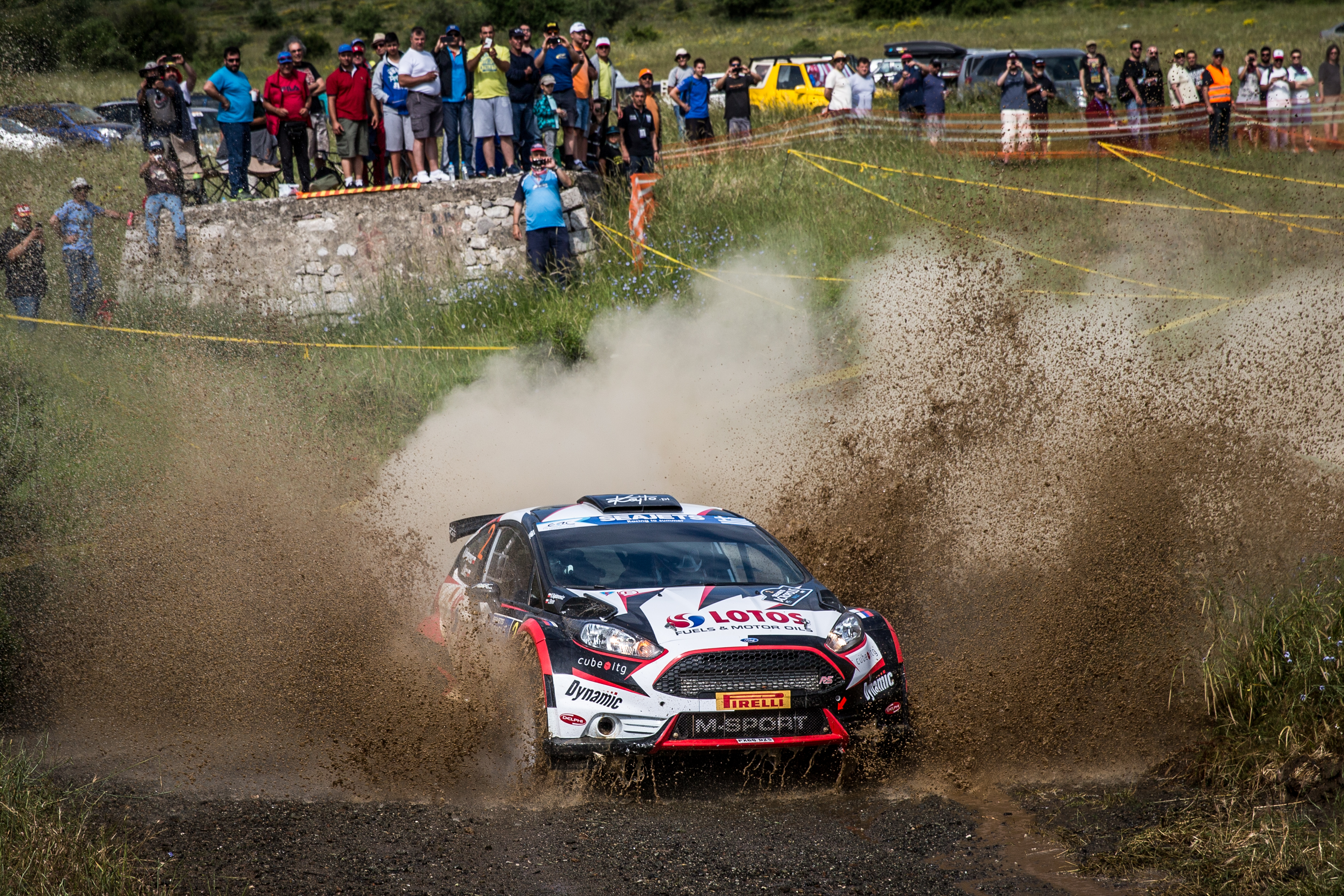 Asphalt and gravel competition in Cyprus: Kajetanowicz and Baran ahead of round four of the 2017 FIA European Rally Championship

Only two weeks separate round three and four of the 2017 FIA European Rally Championship, extremely exciting and hard-fought series. LOTOS Rally Team, fresh after winning Acropolis Rally in tremendous style, starts the 46th edition of Cyprus Rally with their sights set on 2015 repeat – the team won the FIA ERC classification back then. Kajetan Kajetanowicz and Jarek Baran arrive to the island of Aphrodite as second-placed crew in season’s standings, bringing their rally weapon – Ford Fiesta R5, serviced and prepared by Polish division of M-Sport, based in Kraków.

The winners of last week’s iconic battle in Greece face another great challenge. In the country 35 smaller than Poland Kajto and Jarek will fight over the course of more than 720 kilometres, including almost 220 competitive kilometres divided into 14 special stages. The surface is mixed: 80% gravel and 20% asphalt. The rally cars are equipped with suspension and tyres suitable for loose surface.

Kajetanowicz and Baran are motivated by important goal during their intense preparation and competition itself: record-breaking third consecutive European Rally Championship title. Cyprus is a crucial point on the rally map and marks the end of the first half of the season, consisting of eight rounds in total. In their two previous outings in this event Kajto scored second (2014) and first (2015) positions in the FIA ERC standings.

Cyprus Rally forms also round two of the FIA Middle East Rally Championship (FIA MERC) and this event dates back to 1970. It was a part of the World Rally Championship (WRC) calendar eight times. Among winning drivers there are such legends as Stig Blomqvist, Ari Vatanen, Carlos Sainz, Colin McRae, Petter Solberg and Sébastien Loeb. In 1997 this rally was won by Krzysztof Hołowczyc, co-driven by Maciej Wisławski.

There are over 70 crews on the entry list. Poland is represented only by Kajetanowicz and Baran, who are seeded with starting number two. Number one belongs to Bruno and Hugo Magalhães (Portugal, Skoda Fabia R5), number three to double Dakar Rally winner Nasser Al-Attiyah (Qatar) co-driven by Mathieu Baumel (France) in a Ford Fiesta R5. No less than 59 crews drive 4WD cars.

The organisers of this exotic event surprise the rally world with their ideas and innovations every year. This time the crews will compete on stage in the United Nations’ Buffer Zone in Northern Cyprus. It was described by the United Nations (UN) as the most successful measure in the building of trust between the communities of Nicosia since 1974.

There are more unique stages: Love Cyprus Golden Stage 1 and 2, run on Sunday. Crews competing in each category (overall standings and 2WD category), who achieve the best result in both runs, will get financial bonuses. The prize fund is no less than 24 thousand euro. The test runs along Larnaca Bay, in south-eastern Cyprus. In the first version it is 5.31-kms long (100% gravel), in the second – 6.17 kms (74% on gravel, 26% on asphalt).

Top spot in the 2017 FIA European Rally Championship is occupied by Bruno Magalhães, with 93 points to his name. Kajetan Kajetanowicz makes up the lost ground after difficult opening round in the Azores, where he left the road. Win in the previous round moved him into second position and helped to close the gap to 21 points. There are 39 points up for grabs in Cyprus, for overall victory and wins in both legs. The fight for victory is set to be amazing, probably in hottest conditions seen so far this year. Temperatures reach 40 degrees centigrade and the annual average exceeds 19 degrees – by comparison, it is just 8 degrees in Poland.

– The fantastic season continues, it is one of the most difficult ones in the recent FIA European Rally Championship history. Calendar, shortened to eight extremely challenging rounds, and impressive competition with many champions underline the importance of the events and limits the room for calculations. I respect my rivals very much and I expect a lot from myself. It will be the same during Cyprus Rally! I am proud of the whole LOTOS Rally Team – we fly off to Cyprus focused and motivated to exceed further boundaries.

The 2017 FIA European Rally Championship standings after Acropolis Rally (round 3 of 8):

In the first part of our Rally Glossary we will explain the topic of special stages and road sections: the route of the rally. Special stage (SS) is a section of closed road chosen by the organisers, where the crews fight against time. An event consists usually of dozen or so special stages and the final rally classification is set according to cumulative stage times for each crew (SS1 + SS2 + SS3… = result). There might be penalties applied, such as lateness at time control, checking too early at time control, jump start or hitting a “chicane”.

The crews move from one special stage to another in open traffic: these are “road sections”. Sometimes they are several tens of kilometres long and there is strict time limit to cover them. Sometimes crews change tyres or suspension set-up on road section, in order to achieve better time on the following special stage.

There are also superspecial stages, prepared especially for spectators in city centre or on purposely built tracks, such as Tor Mikołajki during Rally Poland, and Power Stages – the final stage of the rally, where the fastest crews are awarded with bonus points.

Schedule of the 2017 Cyprus Rally (all times are CET):