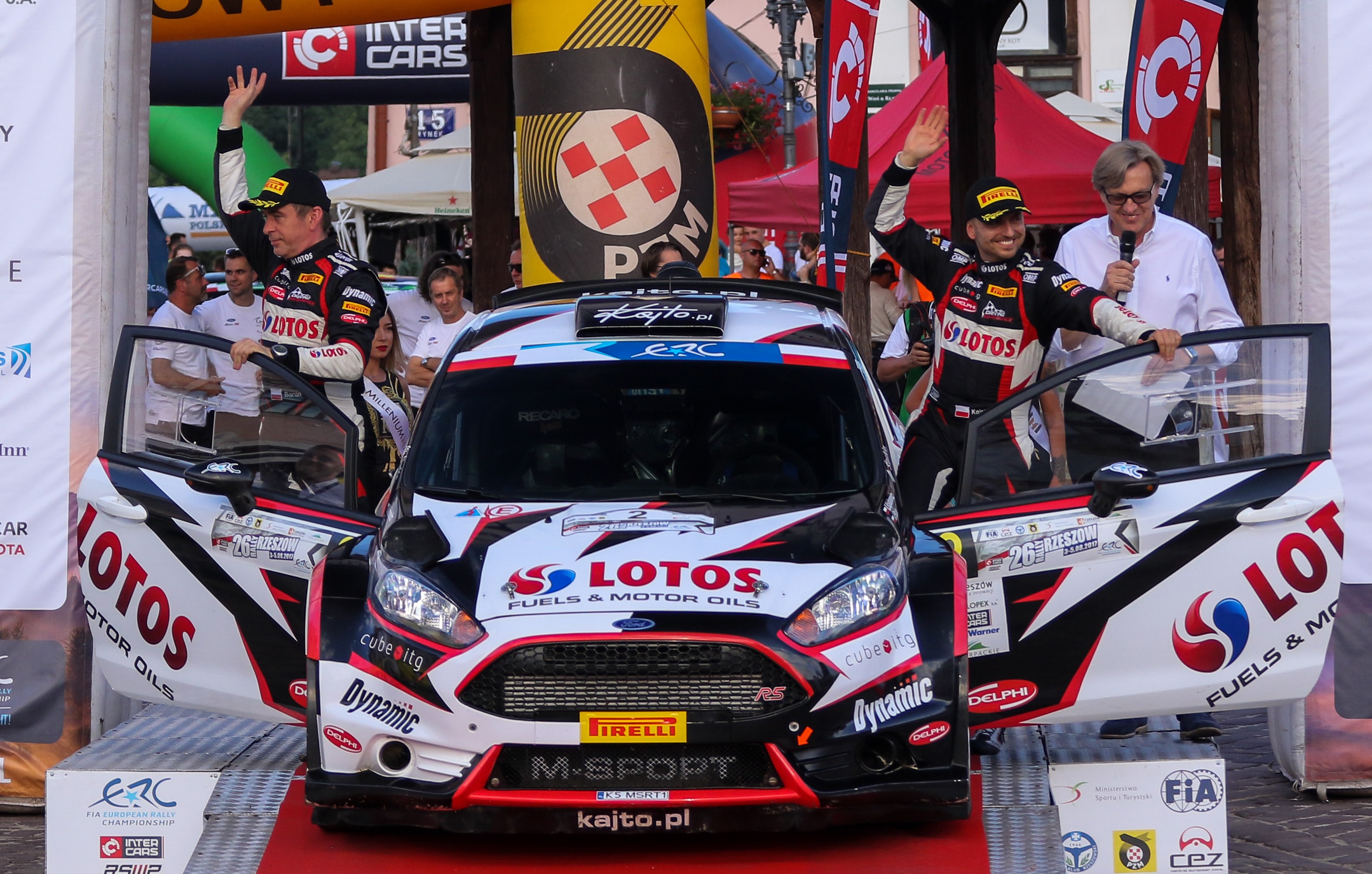 Kajetanowicz and Baran take the lead of the 2017 FIA European Rally Championship – after podium finish in Rally Rzeszów!

Spurred by fantastic support of Polish fans, Kajetan Kajetanowicz and Jarek Baran scored second position in extremely challenging Rally Rzeszów! Round five of the 2017 FIA European Rally Championship brought plenty of unexpected plot twists and its demanding route proved to be a tad too difficult for some competitors. The LOTOS Rally Team crew had one main target: to defeat the current championship leader Bruno Magalhães. This goal was achieved in style, as the gap to the Portuguese driver exceeded three minutes! Kajto and Jarek took the lead of the championship, significantly enhancing their chances of winning their third consecutive title.

The battle of champions promised plenty of excitement ahead of the start. Virtually all European Rally Championship frontrunners took part in the Polish FIA ERC counter which also featured some guest starters. Among top favourites there was a WRC regular with over 100 World Rally Championship round under his belt, Mads Østberg. There were also 25 another competitors driving top cars of R5 category. Many drivers labelled this edition of Rally Rzeszów as one of the toughest: high temperatures not only caused the cars to overheat but also influenced the crews’ focus. The battle was made even harder by changeable grip levels of Subcarpathian asphalt and many bumps which caused the rally cars to jump. For Kajetanowicz, trailing the series leader by 14 points before this rally, the most important thing was to drive fast and fight for the championship lead.

Runner-up spot for Kajetan and Jarek, coupled with bonus points for excellent pace during both legs, brought them 29 points in the championship standings. They lead Bruno and Hugo Magalhães by 13 points (the Portuguese crew have 95 points) while Marijan Griebel and Stefan Kopczyk (Germany) moved into third position with 50 points, after completing the top three in Rally Rzeszów. The event was won by Bryan Bouffier (Ford Fiesta R5), co-driven by Gilbert Dini. It was fifth career win in Rzeszów for the French driver.

The next Tarmac round of the 2017 FIA European Rally Championship takes place in just three weeks. The LOTOS Rally Team moves across southern border in order to fight in Barum Czech Rally Zlin (25-27 August). Afterwards the competitors will visit Italy (Rally di Roma Capitale, 16-17 September) and the season will come to an end in Latvia (Rally Liepaja, 6-8 October).

– We are leading the European championship, our mission is accomplished. The whole LOTOS Rally Team did a fantastic job, many thanks to them. We have scored second position in overall standings, we are the fastest Polish crew. It was a difficult rally in many aspects. Special stages were very demanding: narrow, technical, very fast in some places. On top of that the temperatures were very high. Huge numbers of rally fans could have put some pressure but I did my best to convert this fantastic experience into additional motivation. I hope that our fans as are happy as I am. There are three rallies left this season and I will do everything to maintain the lead. However, rallying is unpredictable and this is why why love it. Even when you work hard, you can never be sure of the final result.

– We share common goal with the whole LOTOS Rally Team: to win third consecutive European Rally Championship title. Podium place scored in Rzeszów moves us into the lead of the overall classification and it was our goal for this weekend. It was fantastic to see so many fans who supported us vigorously. Many thanks to all of you.