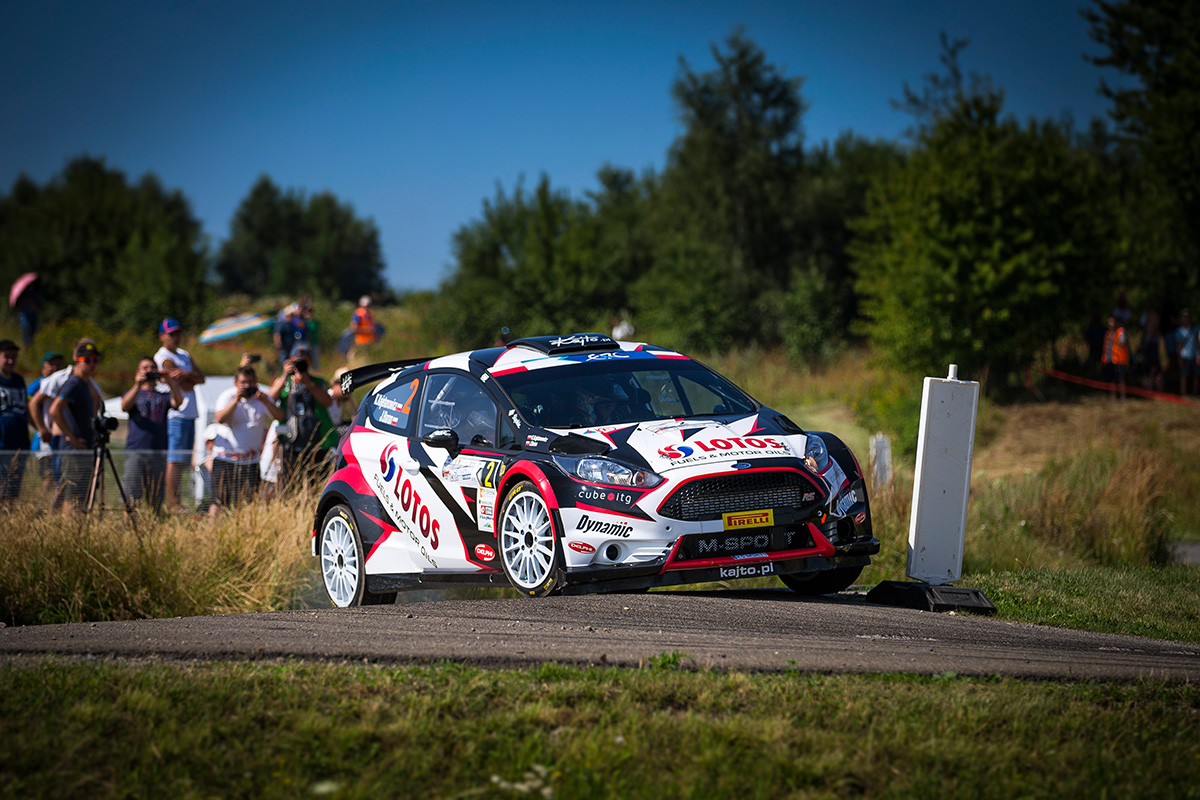 Traditionally, the end of August can mean only one thing for all motorsport fans: Barum Czech Rally Zlín. The Czech rally feast takes place for 47th time and almost 250 cars have been entered for this extremely popular event. Record number of 151 crews will fight in joint round of the Czech Republic and European Championships. Most importantly, the entry list is topped by the LOTOS Rally Team duo of Kajetan Kajetanowicz and Jarek Baran. Reigning European Champions fight for their third consecutive title – a record-breaking feat, never achieved by anyone.

This year’s FIA ERC rivalry is very evenly matched and the results bring a sufficient proof. There were different winners in each of five rounds held so far: Bruno Magalhães (Azores Rallye), Alexey Lukyanuk (Rally Islas Canarias), Kajetan Kajetanowicz (Acropolis Rally), Nasser Al-Attiyah (Cyprus Rally) and, most recently, Bryan Bouffier (Rally Rzeszów). The consistent strategy and assured, fast pace put Kajetanowicz at the front of the pack – the Polish driver is the only competitor who have won special stages of each rally and he enjoys 13-points advantage over his nearest rival. Third-placed driver trails him already by over 50 points.

Apart from Kajetanowicz, the entry list features, among others, second-placed driver of the FIA ERC standings Bruno Magalhães (Portugal), third-placed Marijan Griebel (Germany), round two winner and fourth place holder Alexey Lukyanuk (Russia) and Bryan Bouffier (France), who won the previous round. Thirty seven drivers of the top R5 category cars promise fierce battle which could last until the final few metres. In 2011 the gap between top finisher and runner-up was one of the closest in motorsport: it was just 1.2 seconds!

The Czech event, round number six, is the penultimate one held on asphalt. Although the distance from the rally base to his home area of Silesia in southern Poland is the closest of all season, Kajetanowicz has taken part in this rally just three times. He scored his best result here in 2015 when he grabbed the final podium position in overall standings.

Czech Republic is famous not only for delicious dumplings called “knedliki” but also for very fast drivers of international fame. Jan Kopecký, in particular, deserves special attention among them: he is a sole record-holder of victories in this rally, having no less than six under his belt. Starting number seven belongs to Václav Pech Junior, who scored eight podium finishes in overall standings, including two visits to the top step. Although 21 different countries are present on the entry list, almost 70% of the crews are local.

Among 15 special stages there are famous tests called Pindula, Maják, Semetín and Troják – the longest one of the rally, at almost 23 kilometres. The battle starts with superspecial on the streets of Zlín, where huge crowds of rally fans cheer the crews to fight till late hours. According to data from previous years, the amount of supporters on this stage exceeds 40 thousand!

The knowledge of special stages and their characteristics always play into the hands of local drivers who feature prominently on the entry list. It is not only a challenge but, above all, additional boost to fight which will take place over eight tests on Saturday and six on Sunday. We should get to know the rally winners on Sunday before 16:00 CET.

– The temperatures do not decrease and it seems that after hot Rzeszów similar conditions awaits us at Barum Czech Rally Zlín. The atmosphere is going to be heated not only because of significant Celsius readings on the thermometer – there are always huge crowds of fans from Poland who come over to the Czech Republic, turning up the emotions with their vigorous support. As the Championship leaders we will compete with “one” on our car and this position brings additional motivation to work even harder across the whole LOTOS Rally Team. The rallies run so far this season have shown how difficult it was to climb so high and how fierce the competition is. The season enters its final, crucial phase. I believe that with the support of our partners and fans we are able to do so much.

Rally Glossary – all about rallies
Part 3: Different classes in the FIA ERC

The 2017 FIA European Rally Championship standings are divided into seven different classification and three main categories have separate classifications for drivers and co-drivers.

Let’s start with the most important one: overall standings (ERC Drivers and ERC Co-drivers). After five rounds there are 42 i 44 classified competitors respectively – the difference is due to the fact that some drivers worked with different co-drivers and each of them is included in the standings. The most important thing for us is that Kajetan Kajetanowicz and Jarek Baran lead both classifications.

ERC Teams category have been modified as well: each outfit may nominate three crews and two highest-placed drivers are eligible for championship points (only one crew could score in past seasons). There is also a separate classification for women drivers which has been held for some years. However, ERC Ladies’ Trophy is not very popular: just three ladies are classified so far this season.

Schedule of the 2017 Barum Czech Rally Zlín (all times are CET):