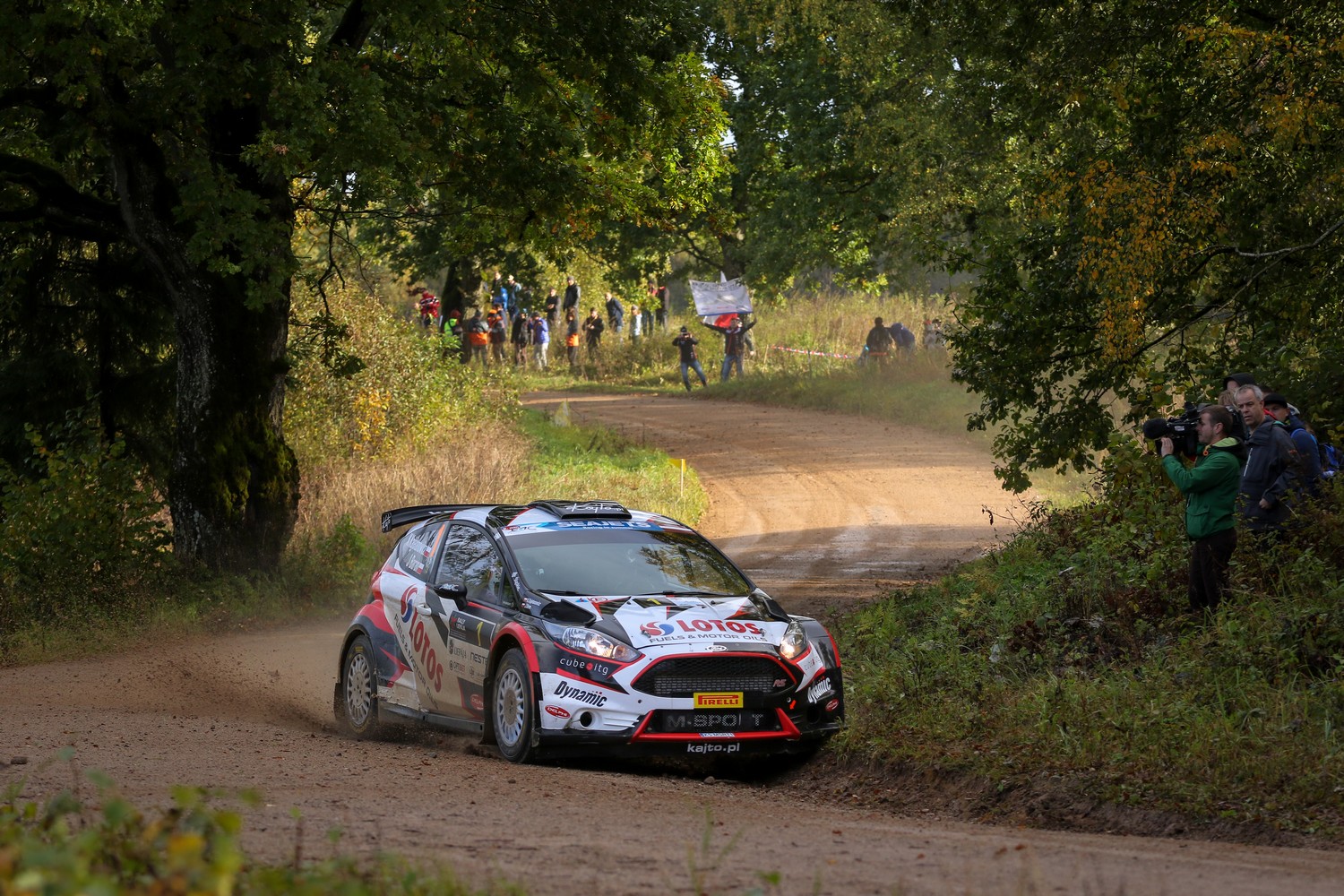 Record-breaking achievement for Kajetanowicz and Baran. They clinched their third title!

The Polish duo of Kajetan Kajetanowicz and Jarosław Baran clinched their third consecutive European Championship title, as the first competitors in 64-years history of the European Rally Championship. Over the course of eight championship rounds and almost 1700 kilometres of European stages the LOTOS Rally Team crew have again proved their supremacy! Exactly 384 days after last year’s success the Poles did not give any chances to their opponents. The final championship round in Latvia brought them this record-breaking success.

Kajetan Kajetanowicz and Jarek Baran remain undefeated for the past three seasons of the European Championship. They have achieved great success over the course of many years: three European Championship titles (2015, 2016, 2017) and four consecutive Polish Championship titles (2010, 2011, 2012, 2013). This year’s achievement is a result of many years of hard work and preparation, refinement of their technique, perfect interaction and preparation within the team, consisting of over 20 people. This is how the champions sum up this FIA ERC season:

– When I started my rally career, seventeen years ago, I did not expect how much you can achieve in this sport. Winning the most important titles, flying white and red colours, brings me plenty of joy and satisfaction. Together with our partners – Grupa LOTOS, Delphi, Driving Experience and CUBE.ITG – we have won the European Rally Championship title for the third time in a row. It is tough to sum up this season shortly. For sure it was full of emotions and difficult decisions, also dynamic and interesting but with many unexpected moments. Now I know that our initial strategy, aimed at winning the Championship, was the best decision of the whole season! We have achieved what our fans were waiting for! This success is a result of hard work of our incredible LOTOS Rally Team together with M-Sport – you are the best in Europe! It a very emotional moment for me, in which I am thinking about my family, my nearest and dearest, my friends, fans, partners. Personally or in thoughts – I know that you are with me and I want to thank you very much for that – said Kajetan Kajetanowicz.

– The European Rally Championship is a unique series. We compete in different countries, on different surfaces and in different conditions. We fight against challenging competitors who demand considerable effort from our side. We have won our third consecutive European Rally Championship title – as the first crew in 64-years history of this series. I know it would have not been possible without multi-year, consistent support of the best Partners. It is difficult to put my feelings into words. This is a great day for us personally and for the whole LOTOS Rally Team. It is not possible to name every person whose direct help and hard work enabled us to climb this summit. My dearest, thank you very much – we are all Champions! This is also a great day in Polish rally history. Words and gestures of support received from you over the course of this difficult year were very important for us. Thank you very much! – added Jarek Baran.

– Winning the third European Rally Championship title in a row is a record-breaking achievement! The duo of Kajetanowicz and Baran have shown great class again. Congratulations for the LOTOS Rally Team crew and many thanks for full tank of sporting emotions provided by them this season. We are looking forward, together with Polish rally fans, for their outing in Rajd Barbórka in Warsaw, which takes place in December – summarised Marcin Jastrzębski, President of the Management Board of Grupa LOTOS.

Eight rounds on the way to the Championship title

Getting the right strategy for this season, in order to achieve third consecutive championship title, required perfect preparation of the whole LOTOS Rally Team. The 2017 FIA ERC season consisted of eight rounds spread over eight months. Each one took place in different European country. The rally quest of the Poles commenced in spring, on volcanic island of São Miguel (archipelago of the Azores), almost 4.000 kilometres away from Poland. Kajetan won three special stages and despite unlucky incident he returned to competition after leaving the road during Leg 1, scoring his first batch of points for second place in Leg 2. Next, the competitors tackled asphalt roads in Rally Islas Canarias, where the LOTOS Rally Team driver notched up further stage wins and finished half of the tests in top three. Thanks to considerable amount of points scored in round two he moved into top three of the overall championship standings.

At the beginning of June the LOTOS Rally Team crew achieved another great success. Kajetan and Jarek won the legendary Acropolis Rally, round three of the 2017 FIA ERC, for the second time. They recorded fastest times on seven out of twelve stages and this result allowed them to make further inroads in the championship classification: they moved into second position. The following outing, gravel Cyprus Rally, proved their excellent pace. The Polish duo won three special stages and recorded 10 top three times.

The final showdown took place in Latvia. Kajetanowicz and Baran have clinched the title after Day 1 of the Rally Liepāja, when their chief rival Bruno Magalhães (Portugal) had to retire. Tomorrow the Polish crew starts the second leg of the rally, fighting for podium position in the final round of the championship.