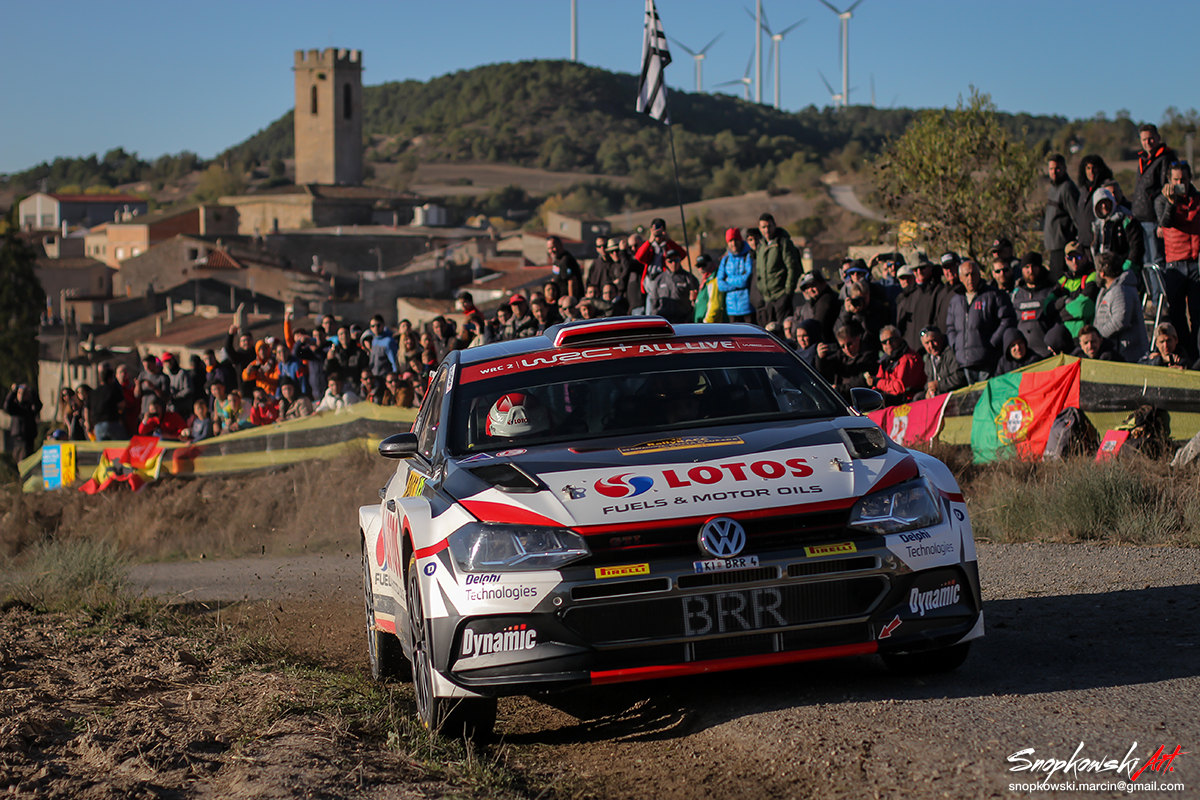 Cheered by the crowd of Polish fans, Kajetan Kajetanowicz and Maciej Szczepaniak completed the second Leg of Rally de España 2019. Thanks to their very good disposition, the Poles have today been promoted to the top three of the WRC 2 category and tomorrow they will fight to maintain their place on the podium. At the end of the day, the LOTOS Rally Team achieved an excellent ninth time in the general classification, beating most of their competitors in R5 cars or nine-time world champion Sébastien Loeb, driving a WRC class rally car!

The LOTOS Rally Team managed to complete the afternoon loop of the asphalt stage of the rally without any major problems. In beautiful weather, many fights between the competitors took place, which made the eyes of the crowd happy. During this rally, Poles repeatedly stressed that they appreciate the cheering of their compatriots, who came to Catalonia in large numbers to support their efforts.

Frenchmen, Camilli and Veillas (Citroën C3 R5) are at the top of the WRC 2 category, while their countrymen, Loubet and Landais (Škoda Fabia R5 evo) lose a minute to them. Kajto and Maciek are in third place, only 18 seconds behind the vice-leaders.
„The second day of RallyRACC Catalunya is a new chance – the asphalt rally. I am glad, because we have been promoted. We are currently on the podium. I have to be clever and at the same time I would like to fight. It’s not easy, because I have a lot of fun driving here. I want to race these guys, but at the same time I have to think about not making mistakes, which come here very quickly. The pace is crazy. This is one of those rallies that can be compared to a race. All the drivers who have driven here before are familiar with these special stages. They’re on the limit, so every small step with the suspension setting can improve or worsen the situation. Unfortunately, it got worse for us on the second loop and that’s what made the tires overheat. We need to take a step backwards and think about which way we can go tomorrow. We are certainly satisfied with the result that we are trying to maintain at the moment. We have all Sunday ahead of us, cool special stages and lots of curves. Keep your fingers crossed,” says LOTOS Rally Team’s Kajetan Kajetanowicz.
The final stage will be held traditionally on Sunday. It covers a total of 74.14 km, comprising two sections: Riudecanyes (16.35 km, 7:41 a.m. and 10:54 a.m.) and La Mussara (20.72 km, 8:38 a.m. and 12:18 p.m.). The results should be known around 01:00 p.m.
Rally de España 2019, unofficial WRC 2 classification after SS 13:
1. Camilli/Veillas (France, Citroën C3 R5) 2:31:54,0 s
2. Loubet/Landais (France, Škoda Fabia R5 evo) +1:00,7 s
3. Kajetanowicz/Szczepaniak (Poland, VW Polo GTI R5) +1:18,7 s
4. Lindholm/Korhonen (Finland, VW Polo GTI R5) +1:29,2 s
5. Veiby/Andersson (Norway/Sweden, VW Polo GTI R5) +3:06,7 s
6. Suarez/Inglesias (Spain, Škoda Fabia R5) +3:14,9 s
7. Andolfi/Inglesi (Italy, Škoda Fabia R5) +3:21,4 s
8. J. Solans/Barreiro (Spain, Ford Fiesta R5 MK2) +3:31,3 s
9. de Mevius/Wydaeghe (Belgium, Citroën C3 R5) +4:26,1 s
10. Bulacia Wilkinson/Cretu (Bolivia/Argentina, Škoda Fabia R5) +5:24,2 s