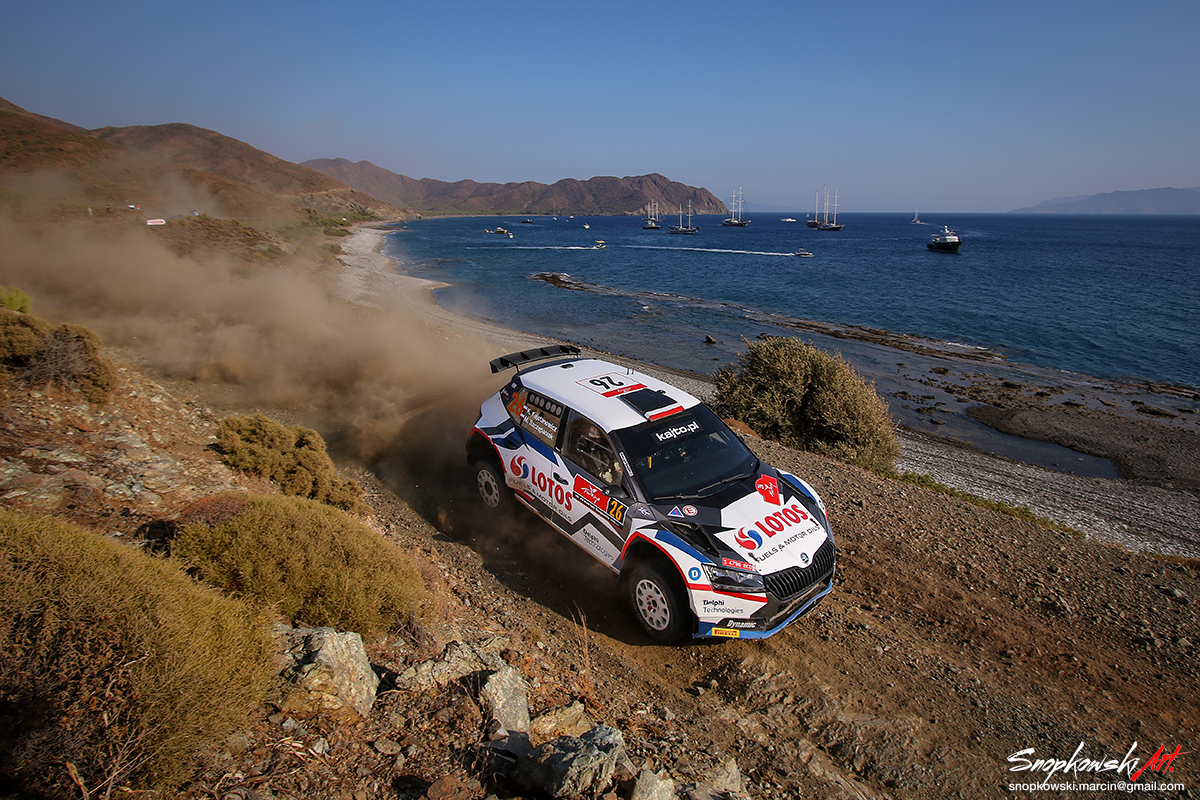 The LOTOS Rally Team crew enjoyed a phenomenal day on Saturday’s special stages of Rally Turkey, round five of the 2020 World Rally Championship. Kajetan Kajetanowicz and Maciej Szczepaniak dominated the proceedings, winning four special stages and setting second-fastest times on the remaining two tests. The Polish duo in their Škoda Fabia Rally2 evo established a comfortable lead of almost 50 seconds over their closest rivals in the WRC-3 standings. After two days of competition Kajetanowicz and Szczepaniak outpace all Rally2 cars, including the factory crews.

The second loop started with the longest test on Saturday – Yeşilbelde (31.79 kms), where Kajetanowicz and Szczepaniak put on another excellent performance, setting tenth-fastest time in the overall standings and defeating all Rally2 competitors. Runners-up in their category trailed the Poles by more than 36 seconds! Another two tests, much shorter, brought further success, with first and second stage times set by the LOTOS Rally Team crew in the WRC-3 category. They finished the day with 46.3 seconds advantage over Bulacia Wilkinson/Der Ohannesian (Citroën C3 R5). Top three is completed by by Fernández/Garcia (Škoda Fabia Rally2 evo).

– We have completed the second day of competition. During any other rally I would say that we enjoy a comfortable advantage but in Turkey we basically start once again from scratch. Everything goes well for us but as always there were some minor struggles. Especially our tyres experienced a hard time. I am very happy with our pace and the fact that we are the fastest crew among all Rally2 cars, including the factory crews. These two days were really difficult but our team is great and the car is well-prepared. Tomorrow we will try to do equally good job on the road, with full concentration – particularly as we are facing probably the longest Sunday of the whole season

On Sunday (20 September) the crews face another two special stages, each of them will be contested twice – with total length of over 88 competitive kilometres. The longest test of the rally – Çetibeli 1 (38,15 km) – starts at 6:30 CET and afterwards the competitors tackle much shorter Marmaris 1 (6.28 kms) stage. Following a service break, the second loop begins at 10:10 CET with Çetibeli 2 (38.15 kms) and the event comes to an end with the Power Stage Marmaris 2 (6.28 kms). The rally will finish around 13:30 CET.