Leader Kajetanowicz extends his advantage in the Azores Airlines Rallye

The competition and challenge on Day 2 of the Azores Airlines Rallye had commenced way before the best European rally crews started the opening stage today, due to changeable weather which loomed large in competitors’ minds. They considered the tyre choice and wondered if the weather forecast had been correct, so that the gravel stages would dry up after torrential rainfall overnight and in the morning.

Kajetanowicz and Baran found their way in this weather and tyres roulette on São Miguel Island, recording top times right from the beginning of Day 2. They started with runners-up spot on Pico da Pedra Golfe: the stage along the golf course, run in opposite direction. The next battle was fought on a very diversified Feteiras stage – with fast and wide downhill sections combined with narrow and slower parts. The LOTOS Rally Team crew made great use of their skills and car, maintaining fast and consistent pace. They won this test and continued their charge on the final stage of the loop, Sete Cidades. On this spectacular, narrow road on the rim of a dormant volcano, along the famous blue and green lake, the Polish crew coped not only with elevation change of 528 metres but also with all rivals. Kajto and Jarek won the biggest number stages run so far: three out of seven, finishing another two in top three.

Thanks to spectacular and efficient performance, Kajetan Kajetanowicz and Jarek Baran extended their lead in round four of the FIA ERC. Before three final stages of today’s competition on São Miguel Island, the championship leaders hold 12.2 seconds advantage over second-placed Lukyanuk and Arnautov (Ford Fiesta R5). Multiple rally champions of the Azores, Moura and Costa, lie third in their Ford Fiesta R5, trailing the Polish crew by 29.6 seconds. 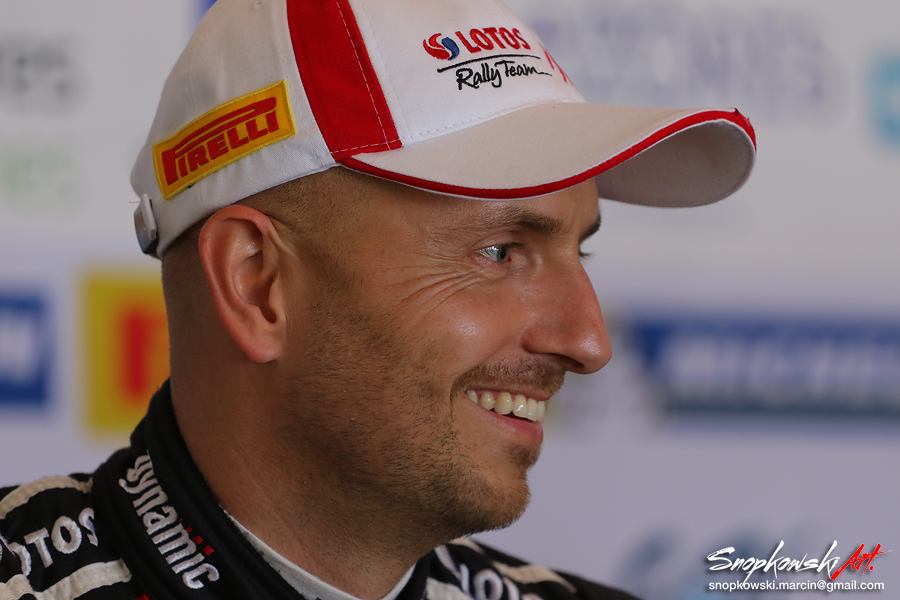 Kajetan Kajetanowicz  I think that every crew left the service park with soft tyres, preparing themselves for damp surface as it was still raining in the morning and all the stages were wet. On the second stage apart from wet surface there was also fog and I have never experienced such thick fog. I was not able to see the road while upshifting, I could not even see the entry to the next corner. This was not a feeling which I would remember fondly but for sure it brought us a lot of emotions. Good thing was that this stage was twisty and slower that the other two because the fog was not so bothering at low speeds. Probably it is difficult to believe it right now, as the sun is shining down here in Ponta Delgada, but this loop was really rich with challenge and new experience – and we are yet to reach the halfway mark of the competition. This rally goes well for us but there are many places where you can leave the road and end the competition prematurely. This is why we have to stay focused and calm until the finish.