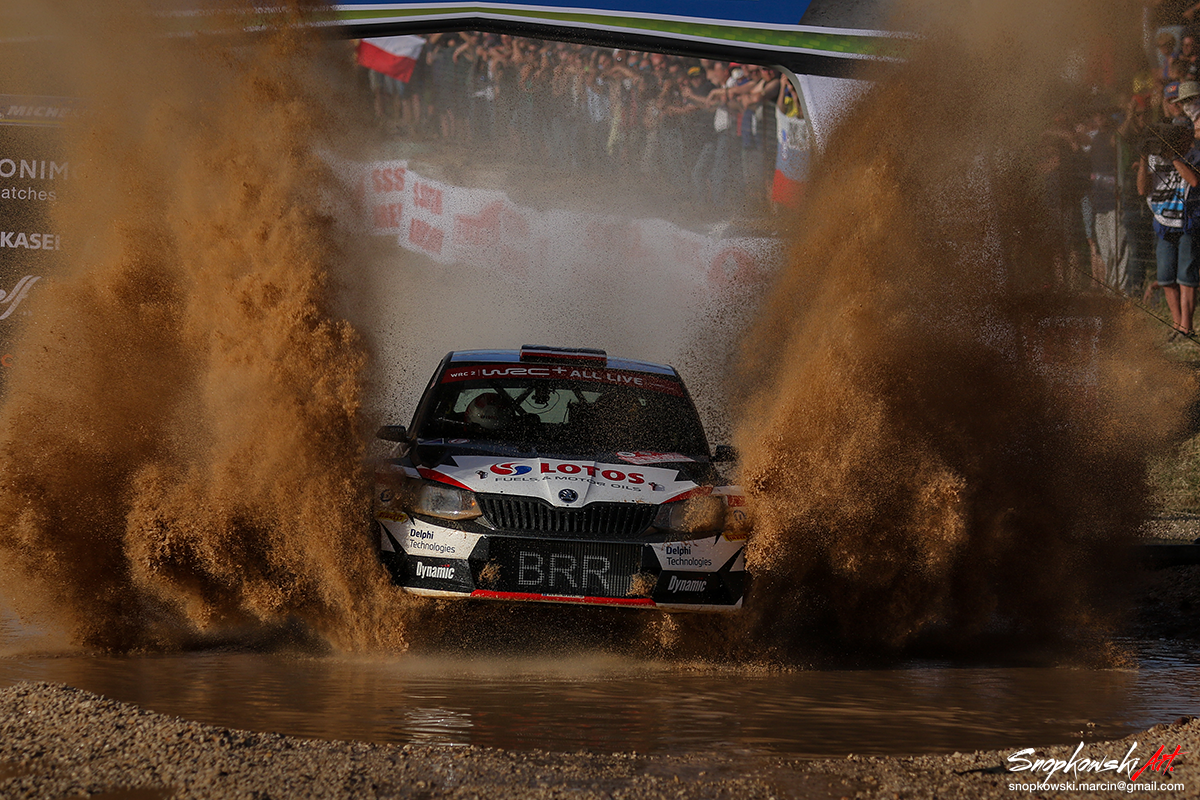 Round eight of the 2019 World Rally Championship – Rally Italia Sardegna – is underway. The organizers of Italian rally have prepared an amazing event, with extremely difficult special stages around the seaside town of Alghero. The LOTOS Rally Team duo, Kajetan Kajetanowicz and Maciej Szczepaniak, play a major part in the competition. The Polish crew, in their first outing in their new rally car – a Skoda Fabia R5 – maintain excellent pace. They set the best time on fifth special stage and hold a position just outside the top three of WRC-2 standings!

The temperature in Sassari region has not dropped below 20 degrees centigrade for a couple of weeks, exceeding 30 degrees over the course of the last few days. Hot conditions are challenging not only for the competitors and teams, but also for the cars. There is only one hope for respite: some wind is forecasted for the next few days and brief gusts could bring some relief for resilient fans, supporting the crews along the route.

– It was a sharp beginning of the day. It was hot and slippery, with many stones. We damaged a tyre on one of the stages. Basically, it was a slow puncture and we do not know where exactly it happened, but we did not lose a lot of time and we won the final stage. This result shows that we are able to drive fast but Rally Italia Sardegna is famous for changeable fortune. Everything can change and you have to stay focused all the time. The surface is changing, so the second loop will be very demanding. First of all, it is very hot – temperature inside the car exceeds 60 degrees – and moreover, there will be plenty of stones or even boulders on the road, which appear after the first passages of the stages. Basically the second loop will be even more random for the competitors. It is a bit unfair because everybody works very hard but we cannot control the road conditions – but that’s the reality in rallying. That’s how Sardegna looks like

Kajetan Kajetanowicz, co-driven by Maciej Szczepaniak, took part in a shakedown yesterday, checking his car set-up on 3,92-kms Olmedo test. The real competition started with 2-kms Ittiri Arena Show superspecial stage. The Polish driver, in his debut behind the wheel of a new car, lost just over three seconds to the stage winner.

Friday started with the first passage of Tula stage (22.25 kms), which was stopped after Fabio Andolfi’s off. His car was undamaged but it got stuck in a ditch and blocked the road. The following stage (Castelsardo, 14.72 kms) was won by Gryazin. Kajetanowicz and Szczepaniak trailed the Russian driver, who lost plenty of time on the previous test, by just 5.4 seconds. The Polish crew moved to the second position in the WRC-2 standings. On special stage number four they recorded eight-fastest time and won the final stage of the loop. The LOTOS Rally Team crew hold fourth position, less than 20 seconds behind the podium position.